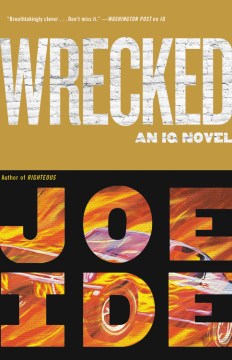 *Starred Review* Ide makes it three for three with his latest IQ novel (following Righteous?, 2017). East Long Beach PI Isaiah "IQ" Quintabe's off-the-grid, help-the-disenfranchised business is thriving in every way but one—money-paying clients (Louella Barnes just settled her bill by knitting Isaiah a reindeer Christmas sweater). IQ's pal, streetwise, chief operating officer–wannabe Dodson, hopes to turn the business around with the help of spreadsheets and a gangsta approach to collections. However, the drug dealer whom Dodson, with help from Isaiah, robbed back in the day is out of jail and looking for his pound of flesh. Meanwhile, Isaiah has a new client, Grace, who is looking for her mom, who is wanted for murder; Isaiah is smitten with Grace and takes the case only to discover that she is every bit as socially awkward as IQ. And the vanished mother leads quickly to a confrontation with a group of former MPs who thrive on torture and are convinced that Grace's mother stole their money. Naturally, a confrontation ensues, with Grace, Dodson, and Isaiah seriously underarmed (as Dodson puts it, "We gonna go in there with a slingshot and a caulking gun?"). Once again, Ide brilliantly combines caper-style comedy with real-world violence and more than a dollop of complex human relationships, the kind that too often lead to mess and muddle rather than happily-ever-aftering. If you haven't discovered this series yet, remedial action is required immediately. Copyright 2018 Booklist Reviews.

Even as partner Dodson creates a Facebook page and pooh-poohs the idea of accepting Christmas sweaters in exchange for solving crime, Isaiah Quintabe (aka IQ), the Sherlock Holmes of East Long Beach, stays down-to-earth by agreeing to help a young painter find her mother. With a 40,000-copy first printing.

Anthony, Macavity, and Shamus Award winner Ide's third book in the series starring detective Isaiah Quintabe "IQ" and his sometimes associate Dodson (after and ) has the duo forming IQ Investigations, although Dodson's methods make his intensely private partner uncomfortable. When IQ accepts a case tracking down the mother of a young artist whom he likes, it becomes apparent that she isn't telling him everything. The investigation turns out to be much more dangerous than expected; concurrently, a long-ago heist Dodson and IQ pulled off has reemerged and threatens to destroy all they've built. Dodson steals the show in this tale with a backstory that has grown more nuanced throughout each book. Past enemies such as African gangster Seb also make a repeat performance. This work is grittier and coarser than previous titles in the series. Gone is the amusing banter between Dodson and IQ; instead, readers are subjected to numerous and explicit torture scenes, ranging from Abu Ghraib to current-day California. Purchase only where the series has a strong following. [See Prepub Alert, 4/23/18.]

Ide's less than successful third mystery featuring Isaiah Quintabe (after 2017's ) focuses on action rather than deduction. Isaiah, the brilliant African-American PI known as IQ, helps his neighbors in Long Beach, Calif., with mostly mundane cases: "Store thefts, break-ins, lost children, wife-beaters, bullies, and conmen." Artist Grace Monarova, an attractive white woman he has a crush on, asks him to trace her mother, Sarah, whom she hasn't seen in a decade but knows is somewhere in L.A. Isaiah doesn't know that Sarah disappeared right after becoming a murder suspect, or that she's also the quarry of a vicious group of ex-military men, led by Stan Walczak, the founder of a global security firm. Walczak and his colleagues, who tortured prisoners at Abu Ghraib but evaded prosecution, are after Sarah because she has threatened to release incriminating video of their abuses unless she's paid off. The flash-forward prologue, in which Isaiah is abused by Walczak and his team, reduces suspense. Fans of Ide's innovative take on a Sherlockian sleuth will hope for a return to form in the next book.

Vanishing in the HaightTomlinson, Max

Where it hurts: a Gus Murphy novelColeman, Reed Farrel, 1956-

Dutch: the first of a trilogyWoods, Teri