The girl with the dragon tattoo / by Stieg Larsson ; translated from the Swedish by Reg Keeland. 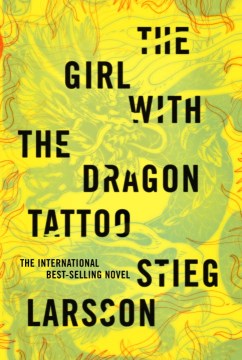 The first U.S. appearance of another major Swedish crime writer is cause for celebration but also disappointment: Larsson, an acclaimed journalist as well as the author of the award-winning Millenium trilogy, of which this is the first volume, died in 2004. The editor of a magazine called Expo, which was dedicated to fighting right-wing extremism, Larsson brings his journalistic background to bear in his first novel. It is the story of a crusading reporter, Mikail Blomkvist, who has been convicted of libel for his exposÃ© of crooked financier Wennerstrom. Then another Swedish financier, a rival of Wennerstrom, wants to hire Blomkvist to solve the decades-old disappearance of his niece from the family's island compound in the north of Sweden. If Blomkvist works on the project for a year, his employer will deliver the goods on Wennerstrom. Blomkvist takes the job and soon finds himself trying to unlock the grisly multigenerational secrets in a hideously dysfunctional family's many closets. Helping  him dig through those closets is the novel's real star, the girl with the dragon tattoo, Lisbeth Salander, a ward of the state who happens to be Sweden's most formidable computer hacker and a fearless foe of women-hating men. Larsson has two great stories (and two star-worthy characters) here, and if he never quite brings them togetherâ€"the conclusion of the Wennerstrom campaign seems almost anticlimactic after  the action-filled finale on the islandâ€"the novel nevertheless offers compelling chunks of investigative journalism, high-tech sleuthing, and psychosexual drama. What a shame that we only have three books in which to watch the charismatic Lisbeth Salander take on the world! Copyright 2006 Booklist Reviews.

Ever since Knopf editor Sonny Mehta bought the U.S. rights last November, the prepublication buzz on this dark, moody crime thriller by a Swedish journalist has grown steadily. A best seller in Europe (it outsold the Bible in Denmark), this first entry in the "Millennium" trilogy finally lands in America. Is the hype justified? Yes. Despite a sometimes plodding translation and a few implausible details, this complex, multilayered tale, which combines an intricate financial thriller with an Agatha Christie-like locked-room mystery set on an island, grabs the reader from the first page. Convicted of libeling a prominent businessman and awaiting imprisonment, financial journalist Mikael Blomkvist agrees to industrialist Henrik Vanger's request to investigate the 40-year-old disappearance of Vanger's 16-year-old niece, Harriet. In return, Vanger will help Blomkvist dig up dirt on the corrupt businessman. Assisting in Blomkvist's investigation is 24-year-old Lisbeth Salander, a brilliant but enigmatic computer hacker. Punkish, tattooed, sullen, antisocial, and emotionally damaged, she is a compelling character, much like Carol O'Connell's Kathy Mallory, and this reviewer looks forward to learning more of her backstory in the next two books (The Girl Who Played with Fire and Castles in the Sky ). Sweden may be the land of blondes, Ikea, and the Midnight Sun, but Larsson, who died in 2004, brilliantly exposes its dark heart: sexual violence against women, a Nazi past, and corporate corruption. Highly recommended. [See Prepub Alert, LJ 5/1/03.]—Wilda Williams, Library Journal

Cases rarely come much colder than the decades-old disappearance of teen heiress Harriet Vanger from her family's remote island retreat north of Stockholm, nor do fiction debuts hotter than this European bestseller by muckraking Swedish journalist Larsson. At once a strikingly original thriller and a vivisection of Sweden's dirty not-so-little secrets (as suggested by its original title, Men Who Hate Women ), this first of a trilogy introduces a provocatively odd couple: disgraced financial journalist Mikael Blomkvist, freshly sentenced to jail for libeling a shady businessman, and the multipierced and tattooed Lisbeth Salander, a feral but vulnerable superhacker. Hired by octogenarian industrialist Henrik Vanger, who wants to find out what happened to his beloved great-niece before he dies, the duo gradually uncover a festering morass of familial corruption—at the same time, Larsson skillfully bares some of the similar horrors that have left Salander such a marked woman. Larsson died in 2004, shortly after handing in the manuscripts for what will be his legacy. 100,000 first printing. (Sept.)

Save me from dangerous menLelchuk, Saul