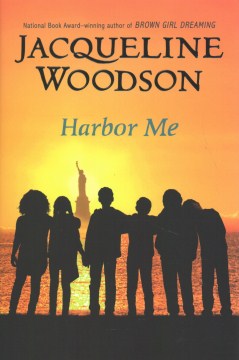 *Starred Review* Six fifth- and sixth-graders, all in a special class for those who learn differently, are suddenly given, by their beloved teacher, an extra hour of safe space—an empty classroom where they are told they can talk about anything or nothing. At first, it's nothing. Then, Haley, the book's narrator, describes how each child begins to unfold. Esteban's story demands to be told first; Immigration Services have taken his father away. The others lend sympathy and support, and then, over the course of a school year, more confidences are shared. Ashton, one of the school's few white kids, is bullied. Amari sketches guns and worries about being shot. Puerto Rican Tiago struggles with being American, yet not American. Haley's own story is intertwined with that of her best friend, Holly. Haley's red hair comes from her father, but he's in jail and Haley's mother is dead; an uncle cares for the hyperactive Holly. The plot, at times, creaks, especially the setup. But the magic is in the writing. Woodson tells stories torn from headlines but personalizes them with poetry and memories, blunting their trauma with understanding and love. Haley's history weaves in and out, drawing readers close. These children become each other's safe harbors, and Woodson brilliantly shows readers how to find the connections we all need. HIGH-DEMAND BACKSTORY: A national author tour will support the beloved author of Brown Girl Dreaming (2014). Grades 5-8. Copyright 2018 Booklist Reviews.

Every Friday, narrator Haley and her classmates sit in a circle during the last hour of school to talk about whatever they want without their teacher. While grappling with immigration, racism, incarceration, and loss, they also explore identity, community, change, and forgiveness. Woodson's craft as a weaver of words and imagery is evident throughout this timely tribute to the resilience of young people and the power of human connection. Copyright 2019 Horn Book Guide Reviews.

One day, Ms. Laverne gathers her small class of fifth and sixth graders and walks them over to the old art room, where she invites them to talk to one another—without her. Every Friday at two o'clock, narrator Haley and her classmates sit in a circle during the last hour of the school day to talk about whatever they want. At first, the six students are skeptical and question Ms. Laverne's judgment in leaving them alone—in pushing them "from the Familiar to the Unfamiliar"—but they soon realize the gift that she has offered them. While grappling with challenging issues of immigration, racism, incarceration, grief, and loss, they also explore deep issues of identity, community, family, change, and forgiveness. The power of remembrance is also an important theme, with Haley offering her voice recorder as a medium to collect her classmates' stories and voices. As the school year unfolds, the safety and sanctity of their space deepens, as do their friendships. Woodson's (Brown Girl Dreaming, rev. 9/14) latest will speak to young people's insecurities and fears while recognizing their courage in facing them, and her craft as a weaver of words and imagery is evident on every page. A timely tribute to the resilience of young people and to the power of human connection that often overrides our differences. monique harris Copyright 2018 Horn Book Magazine Reviews.

Woodson () celebrates all that is essential and good for humanity—compassion, understanding, security, and freedom—in this touching novel about six children with special needs. Sixth-grader Haley and her best friend, Holly, don't know much about their four male classmates when they are placed in a self-contained classroom. They soon discover the things that they do and do not have in common when, on Friday afternoons, their teacher takes them to ARTT (a room to talk). Here, without adult supervision, the class can have conversations about anything. Usually the students use the time to unburden themselves of problems ranging from a parent's deportation to bullying in the schoolyard. Haley is the last to spill her secrets, about her mother's death and why her father is in prison, and afterwards she is rewarded with a feeling of lightness, "like so many bricks had been lifted off me," she says. Woodson's skills as poet and master storyteller shine brightly here as she economically uses language to express emotion and delve into the hearts of her characters. Showing how America's political and social issues affect children on a daily basis, this novel will leave an indelible mark on readers' minds. Ages 10–up. Aug.)