The war outside / Monica Hesse. 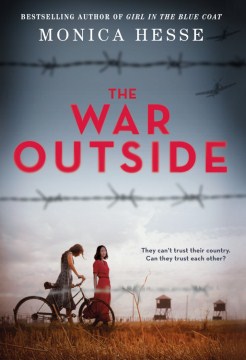 *Starred Review* It's 1944 and WWII is raging, and Japanese American Haruko and German American Margot and their families—both regarded by the U.S. government as enemy aliens—have been remanded to the Crystal City, Texas, family internment camp. Though the German and Japanese populations there are largely self-segregated, Haruko and Margot meet and become unlikely friends. As their friendship intensifies, the two girls begin to fantasize about a life together outside the camp, but then two momentous things happen: they experience a moment of unusual, almost frightening intensity, and two little girls, one German and one Japanese, drown in the camp pool. After that, things change dramatically and irredeemably. Hesse (Girl in the Blue Coat, 2016) has written an extraordinary novel of injustice and xenophobia based on real history. The Crystal City camp actually existed, as did a few characters and situations portrayed in the novel. Hesse does a superb job of recreating life as it was lived by innocent people forced to exist surrounded by barbed wire fences and guards. In Haruko and Margot, she has written developed, multidimensional characters who live dramatically on the page. Readers will empathize with them and their plight, wishing the best for them but also understanding, thanks to the author's unsparing honesty and integrity, that not all endings are happy ones. Grades 9-12. Copyright 2018 Booklist Reviews.

During WWII, Haruko (who's Japanese American) and Margot (German American) meet in the Crystal City internment camp in Texas. They form a secret friendship that must withstand suspicion, xenophobia, and the degradation of their families. Told in the girls' alternating voices, this is a touching and enlightening story of friendship and perseverance during a shameful chapter in U.S. history. Includes notes on historical accuracy. Copyright 2019 Horn Book Guide Reviews.

In 1944, 17-year-old Japanese-American Haruko, from Colorado, and German-American Margot, from Iowa, are imprisoned with their families in a Department of Justice–run internment camp for "enemy aliens" suspected by the U.S. government of being spies. (The camp differs from WWII War Relocation Authority–run camps to which West Coast Japanese residents were relocated en masse, an author's note explains.) Although the two groups in the Texas camp rarely mix, the young women are immediately drawn to each other. Both are experiencing family problems: Haruko worries about her brother, who is serving in the U.S. Army's Japanese division, and wonders what her father had to do with her family's relocation; Margot's father finds himself courted by Nazi idealists as their situation worsens, and her pregnant mother fears yet another miscarriage. Camp life, with its daily indignities and occasional tragedies, grows tense, and the two girls find their friendship intensifying. Hesse () draws Margot and Haruko realistically and sympathetically, bolstered by research into WWII internment camps, in a moving book that successfully describes an unjust aspect of U.S. history. Ages 12–up.