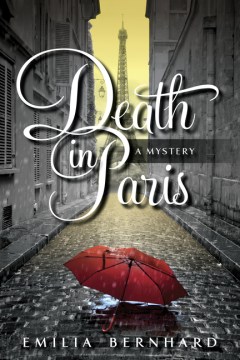 *Starred Review* In this très charmant debut, Americans in Paris Rachel Levis and her best friend, Magda, investigate the death of Rachel's old beau, Edgar Bowen, who appears to have drowned in his soup. Rachel tries to keep her sleuthing under wraps from her husband, but once she's named in Edgar's will and is asked to organize the dead financier's library, she has to come clean about how she's been spending her time—learning about suspects, like Edgar's adult son, Edgar's fastidious French ex-wife, the woman he had been dating, and the twentysomething woman who had been his aide de bureau (and probably nothing more, but one never knows). Rachel's entire basis for suspecting foul play is that a type of wine Edgar detested was present at his death. But when her suspects start disappearing or dying, she feels compelled to bring in the police. Rachel and Magda are delightful amateur sleuths—not quite Lucy and Ethel, but capable of getting themselves into quite a mess. Though set in the present, the book has a timeless quality—mentions of a podcast or a pop-culture reference are the only things keeping the story from taking place at any point in the last 30 years. Fans of cozies and the City of Lights, or drawn to the theme of female friendship, will eagerly await an encore. Pair this with Cara Black's beloved Aimée Leduc series. Copyright 2018 Booklist Reviews.

American Rachel Levis learns that her ex-boyfriend of 20 years ago, French financier Edgar Bowen, has drowned in a bowl of soup. The police rule the death accidental and move on to other cases. Rachel's husband, Alan, doesn't remember Edgar's significance in Rachel's life, but her friend Magda does. When Rachel hears that a bottle of rosé was on the table at the time of his death, Edgar's dislike of the wine sticks out to her. Then, she receives a bequest from Edgar's will that asks her to catalog his library and in the process choose a book to keep. With more than one person acting strangely at the funeral and the reading of the will, Rachel and Magda decide to use Rachel's invitation into the library as a means to investigate. Could the killer be the ex-wife, the girlfriend, the mystery woman, the butler, or the son? And what if it turns out there was no murder? Readers of Joanne Fluke or those who enjoy contemporary cozy mysteries with amateur sleuths will gobble up this first in a series with two Americans in Paris as if it's an actual treat in a Paris café.

Bernhard's delightful debut and series launch, an often witty comedy of manners, gives a view of the highs and lows of contemporary Parisian society through the eyes of Rachel Levis, an American who has lived in the city for some 20 years and is now married to a successful banker. Rachel is stunned one morning to open the newspaper and discover that financier Edgar Bowen has died while dining alone at his home—drowned in his vichyssoise after suffering an apparent heart attack. Edgar was her lover in her early days in France; "he had helped her to stop being young and start being interesting—and, even more important, to start being interested." When, at his funeral, she hears that a bottle of rosé was on the table when he died, she's sure that he must have been murdered: "Edgar hated rosé. He said it was a good white spoiled." With her friend Magda by her side, she decides to investigate his death. Bernhard fills the novel with entertaining characters, conjures up an authentic Paris, and gives the reader intelligent, if frothy, fun.