Ask me no questions / Shelley Noble. 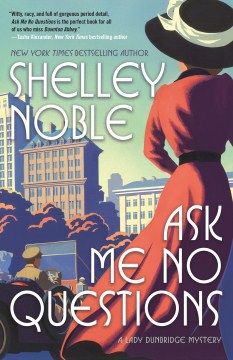 After disgracing her London family with her sleuthing, 26-year-old Lady Philomena Dunbridge—widowed after a loveless marriage to an earl—has no choice but to go to America in 1909, taking along butler Preswick and lady's maid Lily. But just after Phil spots her old friend Beverly Reynolds at the New York dock, Bev's husband, Reggie, is shot in his nearby roadster, found dead with his head in the lap of his chorus-girl mistress, Mimi LaPonte. With her entry into New York's social scene curbed by Bev's mandated mourning period, Phil offers her friend solace (little needed after the death of philandering Reggie) and advice, as Bev also is a suspect. So with the aid of Preswick and Lily, Phil starts investigating, which becomes more complicated when a man is found dead in the Reynolds' library; the reading of Reggie's will yields surprises; and threats are made. This start to the Lady Dunbridge series captures its time and place effectively while leaving intriguing questions unanswered about Lily's past and the identity of a mysterious man who hints of romance ahead. Entertaining historical mystery with an enterprising protagonist. Copyright 2018 Booklist Reviews.

Set in 1907, this promising series launch from romance author Noble () introduces Philomena Amesbury, Lady Dunbridge, who's coming to the end of the official mourning period for her much older husband, "a man who had no feelings, including the intimate kind, unless it involved whips and madams." Her father gives her an ultimatum: find a suitable companion, return to her parental home, and remain a spinster, or live with her dreaded great-aunt Sephronia in Yorkshire. Refusing these fates, Lady Phil, in the company of her butler and her lady's maid, sets sail for New York City to visit her friend Bev Reynolds, whose husband, Reggie, is shot dead in the back seat of his automobile, his head in the lap of his most recent mistress, shortly after her arrival. Lady Phil steps up to investigate. The book fairly flies along, whisking readers through Manhattan's champagne-sipping high life, with jaunts to the racetrack along the way. Classy, clever, and fun, this is a propitious start for dashing Lady Phil. Agent: Kevin Lyon, Marsal Lyon Literary. (Oct.)

What the dead leave behindSimpson, Rosemary, 1942-

Love in a nutshellEvanovich, Janet