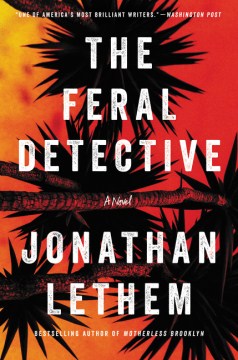 *Starred Review* Nearly two decades after his last mystery, Motherless Brooklyn? (1999), Lethem gives us another, a funny but rage-fueled stunner about a New Yorker tracking her mentor's missing daughter on the West Coast. When 18-year-old Arabella disappears from Reed College, talkative Phoebe reaches out to taciturn Charles Heist, who is either a feral detective, a detective who finds feral youths, or both—it's not immediately clear. Together, they track Arabella (who is using Phoebe's name) up Mount Baldy to a Buddhist retreat and then out into the Mojave Desert where Arabella may be among the Rabbits or the Bears, two long-established communities of off-the-gridders with very different cultures. Set in the days surrounding Donald Trump's inauguration, this echoes with Phoebe's explicitly voiced outrage and sadness about the country's political right turn, yet it also feels allegorical, what with lost tribes wandering in the desert and all. Lethem, apparently, began writing feverishly the day after Trump was elected, and it's fascinating to read a book set at such a specific and recent moment. Both Phoebe and Charles are compelling, as are the desert setting and the vividly realized descriptions of its dwellers, who, seeing their own country grow alien, have left the center for the margins. Politics aside, it's an unrelentingly paced tale where the protagonists' developing relationship is just as interesting as the puzzle they're trying to solve. Utterly unique and absolutely worthwhile. Copyright 2018 Booklist Reviews.

Billed as MacArthur Fellow Lethem's first detective novel since Motherless Brooklyn but obviously much more, this work opens with Phoebe Siegler in the desert near Los Angeles seeking out offbeat Charles Heist for his remarkable people-finding skills. Phoebe is looking for her friend's missing daughter, caught somewhere between two opposing factions—the Rabbits and the Bears—living off the grid in inland California. With a 200,000-copy first printing.

Lethem hits a wall in his forgettable latest (following ). Phoebe Siegler, a consummate New Yorker, travels to the Mojave Desert in search of Arabella, a friend's missing daughter and an 18-year-old dropout of Reed College. She hires hirsute Charles Heist, the "feral detective," who lives with three dogs and an opossum. Quickly falling for his woodsy charms, Phoebe travels with Heist to the far reaches of the desert, where the mostly female Rabbit group is engaged in a long standoff with the male Bear group. To save Arabella, Heist will have to do battle with the charismatic Bear leader, called Solitary Love, as Phoebe learns to question her assumptions here on "the far side of the Neoliberal Dream." The novel feels like it was written as a kind of therapy in the aftermath of the 2016 election—which Lethem's characters frequently bring up—as well as the death of Leonard Cohen, who also gets a lot of ink. None of this can salvage the book, which features howling men and howling bad prose (during a sex scene, Phoebe longs for Heist to "uncrimp my foil"), making this tone-deaf Raymond Chandler pastiche an experiment worth avoiding.

The Golem of HollywoodKellerman, Jonathan