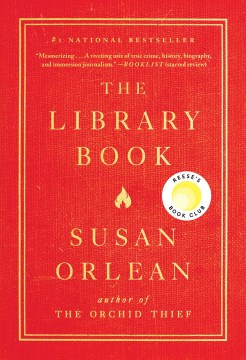 *Starred Review* Libraries pulse with stories and not only those preserved in books. When creative nonfiction virtuoso Orlean (Rin Tin Tin, 2011) first visited Los Angeles' Central Library, she was "transfixed." Then she learned about the 1986 fire, which many believed was deliberately set and which destroyed or damaged more than one million books and shut the library down for seven years. Intrigued, Orlean embarked on an all-points research quest, resulting in this kaleidoscopic and riveting mix of true crime, history, biography, and immersion journalism. While her forensic account of the conflagration is eerily mesmerizing, Orlean is equally enthralling in her awestruck detailing of the spectrum of activities that fill a typical Central Library day, and in her profiles of current staff and former head librarians, including "brilliant and forceful" Tessa Kelso, who ran into censorship issues, and consummate professional Mary Jones, who was forced out in 1905 because the board wanted a man. Orlean widens the lens to recount the crucial roles public libraries have played in America and to marvel at librarians' innovative and caring approaches to meeting diverse needs and cutting-edge use of digital technologies. She also attempts to fathom the truth about enigmatic Harry Peak, the prime arson suspect. Probing, prismatic, witty, dramatic, and deeply appreciative, Orlean's chronicle celebrates libraries as sanctuaries, community centers, and open universities run by people of commitment, compassion, creativity, and resilience. HIGH-DEMAND BACKSTORY: Orlean's best-sellers have long lives, and this well-publicized praise song to libraries will have special book-lover appeal. Copyright 2018 Booklist Reviews.

On April 29, 1986, the Los Angeles Public Library went up in a blaze that would be the worst library fire in America's history, destroying more than 400,000 books. Who setthe fire, and why? After moving to Los Angeles, New Yorker staff writer Orlean (The Orchid Thief) decides to seek answers.

In this lively and multilayered portrait of the Los Angeles Public Library by Orlean (), the author describes a source as "electrified by everything he told me about the library." The same can be said for Orlean, whose enthusiasm and affection for the nearly 150-year-old institution is contagious. As in previous books and essays, Orlean assembles a panoramic profile from an array of fascinating details, from the library's earliest days as a reading room to its current thriving community presence as a provider of English classes, sheet music for orchestras, services for the homeless, and more, including sketches of its charismatic—sometimes eccentric—directors, staff, and patrons. This sweeping, cheerful history revolves around a singular terrible event: the 1986 fire that ravaged the Central Library, destroying some 400,000 books. Orlean's affecting account of the tragedy and its painful aftermath, as well as the many people it touched, points to a suspect who was never indicted. But the overall tone is warm and engaging, offering a love letter to libraries everywhere. Orlean's fans, library lovers, and readers of eclectic nonfiction will enjoy this entertaining, informative account. [See Prepub Alert, 4/9/18; "Editors' Fall Picks," LJ 8/18.]

staff writer Orlean () doubles as an investigative reporter and an institutional historian in this sprawling account of the 1986 fire at the Los Angeles Central Public Library. On April 29, 1986, just before 11 a.m., a fire broke out in the stacks of the main branch and burned for seven hours, destroying 400,000 books and damaging hundreds of thousands more. Harry Peak, the man police believed started the fire, was arrested but never charged. Orlean's investigation into the fire—Was it arson? Why would Peak, a struggling actor and frequent patron of the library, want to burn it down?—leads her down the library's aisles of history, as she seeks out books on the flawed science of arson forensics along with titles from California serial killer Richard Ramirez's reading list to better understand the minds of psychopaths. Along the way, she introduces readers to California Public Library system staffers, among them Arin Kasparian, on the circulation desk; Kren Malone, director of the main branch; and Glen Creason, a senior librarian whose tenure spans "the fire the AIDS crisis, which killed 11 librarians." Midway through, Orlean reveals her own motivation for her return to long-form journalism: her mother's dementia has made her acutely aware of how memories are doomed to be forgotten unless they're recorded. This is a persuasive reminder of the importance of libraries, whose shared spaces house historical treasures built with the common good in mind. (Sept.)