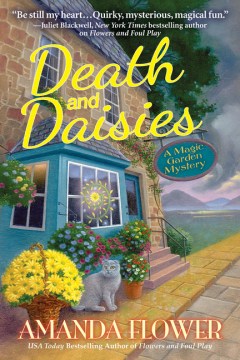 Fiona Knox, formerly a florist in Tennessee, is about to open a flower shop in Bellewick, on the coast in Aberdeenshire, Scotland. She has inherited from her godfather a home and magical garden in nearby Duncreigan, and that alone is enough to incur the wrath of the local Church of Scotland pastor Quaid MacCullen, who has even gone so far as to bar her from the church. On the eve of the shop's opening, a violent thunderstorm rages. During the successful opening of the shop the next day, the local constable barges in, announcing that MacCullen's body has washed up. Fiona becomes a prime suspect—especially as the handsome local chief inspector, Neil Craig, has seen one of the threatening notes tacked to the flower-shop door. Fiona, still finding her way among the townspeople, asks questions, despite Craig's warnings, putting herself at risk, but also putting the pieces together. Fans of cozies with mystical elements will enjoy Fiona's visits to her magical garden and her visions upon touching the ancient menhir hidden there. This is the second in Flower's Magic Garden series ( following Flowers and Foul Play, 2018). Copyright 2018 Booklist Reviews.

When Fiona Knox inherited her godfather's cottage and magic garden in Scotland in , she thought she'd be welcome in the village where the MacAllisters have lived for centuries. Instead, the village rector, Quaid MacCullen, bars her at the church door. He disapproves of the family and the garden. Then on the eve of the opening of her new Climbing Rose Flower Shop, he threatens her. Even so, the opening is a success until the volunteer village police chief announces he's found the minister's murdered body. Although Chief Inspector Neil Craig never treats her as a suspect, Fiona feels accused because she had recently been a suspect in another murder investigation. After losing her flower shop in the States, Fiona is determined not to see another business succumb to rumors and suspicion. Introduce this series, with its charming characters and enchanting setting, to readers of other Scotland-set cozies, such as those by Paige Shelton and Molly MacRae. The magic realism aspect may appeal to fans of Ellery Adams and Sarah Addison Allen.

In Flower's gentle sequel to , Tennessee-born florist Fiona Knox, who has recently moved to the tiny Scottish fishing village of Duncreigan, is set to open her new shop, the Climbing Rose, named after the 300-year-old rose growing in her cottage garden, a legacy bequeathed to her by her godfather, who has enjoined her to use the magic the garden contains to help others. The day before the shop's official opening, Quaid MacCullen, the local parish rector, drops by to make it clear that Fiona and her hocus pocus are not welcome in town. The next day, MacCullen's body is found on the beach. Bruising on his neck indicates that he has been murdered. Fortunately, handsome Aberdeen-based Chief Insp. Neil Craig, with whom Fiona is smitten, is on hand to deal with the official investigation, while Fiona assists by piecing together gossip and her own observations. Those with a taste for fantasy-tinged cozies will want to see more of the appealing Fiona. Agent: Nicole Resciniti, Seymour Agency. (Nov.)

Murder by the bookElliott, Lauren

Aunt Dimity and the next of kinAtherton, Nancy

Kilt at the Highland GamesDunnett, Kaitlyn

By book or by crook: a lighthouse library mysteryGates, Eva, 1951-