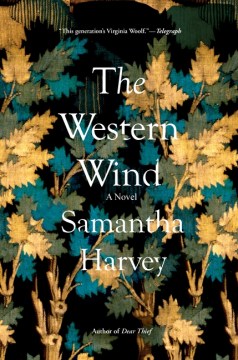 *Starred Review* The events of four days, detailed in reverse and through the eyes of a parish priest, John Reve, tell the story of a drowning death in the Somerset, England, village of Oakham in 1491. The death of the village's richest citizen, a man named Newman, who may have committed suicide or been murdered, frames Reve's crisis of faith, which, in turn, colors the very landscape and shapes his judgment, corporeal and, perhaps, eternal. Oakham is an isolated village, cut off from others by its failed bridge and constantly plagued by dreadful weather, flooding, illness, and death. Its denizens are gray, in dress and spirit, and, as Reve hears their paltry confessions, he tasks them with atonement and asks them (and himself) to work their way back to God's grace. The county dean arrives after Newman's drowning, requiring answers that Reve is loath to give honestly—a necessary deception. Harvey evokes the darkness of both winter and spirit with stark yet lovely imagery: "I didn't know how the trees kept their enthusiasm for growing." Reve's meditations on purgatory, illness as punishment, priestly intervention, God in nature, and the nature of sin are mirrored in the story as the characters grapple with the grief of loss and the frustration of ambiguity. Like Mary Doria Russell's The Sparrow (1996) and Morris West's The Last Confession? (2001), this compulsively readable portrait of doubt and faith reveals, in small lives, humanity's biggest questions. Copyright 2018 Booklist Reviews.

A Betty Trask Prize winner and ultra-nominated British author, Harvey returns with a new novel, set in 1491 in the village of Oakham. When Oakham's richest man is swept into the river on Shrove Saturday, no one knows whether it was by his hand, by another's, or by accident.

Told in quietly arresting prose, this new book from award-winning British author Harvey () is set in 1491 Oakham, a not terribly prosperous village now bone-sodden after a particularly dreary winter. As the work opens, Thomas Newman, Oakham's wealthiest man, has been lost to the swollen river on Shrove Saturday, whether by his hand, by another's, or by accident no one knows. Conscientious pastor John Reve tries to comfort his flock while holding off the preening, sanctimonious dean, who is eager to find fault with John's ministry and convict someone for Thomas's murder. The story unfolds backward in time from Shrove Tuesday to the day of Thomas's death, with John hearing confession from his carefully sketched parishioners, pondering his friendship with the deceased (they argued intriguingly about theology), and recalling his own family, including a sister just lost to him through marriage. As the narrative moves to a superbly conceived ending, Thomas emerges as a good but grieving man, and it soon becomes clear that John understands more of what happened than he lets on. Highly recommended for readers of literary and historical fiction. [See Prepub Alert, 5/21/18.]

Harvey () weaves a dazzling tapestry around loss and confession in late-15th-century England in this breathtaking novel. Thomas Newman, benevolent landlord and relative newcomer to the hamlet of Oakham, disappeared into the river on the Saturday before Ash Wednesday. Parish priest John Reve recounts the icy unnamed rural dean's condescending investigation into the death across four days in reverse order, beginning on Shrove Tuesday, the day Newman's shirt is found near the river. The dean urges Reve to report any information gleaned from the parish's pre-Lent confessions to determine if Newman was killed, slipped, or committed suicide. During his investigation, Reve hears about the mundane mistakes, distressing habits, and intentionally aggressive mutterings from a number of possible suspects. There's Lord Townshend, the landowner who has reluctantly sold holdings to Newman to pursue his quixotic cheese-making endeavors; Herry Carter, who thought of Newman as a father but is behaving as if he needs to atone; Sarah Spenser, who keeps confessing to the murder but may be seeking the relief of death from her wasting disease; and other shady types with suspicious reactions. Amid his attempts to deflect the dean's intrusions and comfort his flock, Reve mourns his sister's recent departure and recalls Newman's friendly jabs against priestly intercession in favor of personal piety. Harvey's final chapter unspools the truth of Newman's death and Reve's own surprising secrets. The lush period details and acute psychological insight will thrill fans of literary mysteries and historical fiction. This is an utterly engrossing novel.

An instance of the fingerpostPears, Iain

Once upon a riverSetterfield, Diane

The princes of Ireland: the Dublin sagaRutherfurd, Edward

Those who go by nightGaddes, Andrew