Into the night / Sarah Bailey. 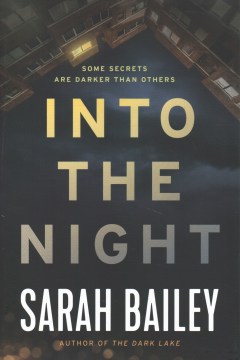 *Starred Review* The murder of homeless Walter Miller has priority with Melbourne police until another case takes precedence. Actor Sterling Wade, known for his television work, is killed during the filming of a crowd scene while being mobbed by actors costumed as zombies in what was to be his breakthrough movie role. Detectives Gemma Woodstock and Nick Fleet, assigned to the Wade case, are soon frustrated by a wealth of information but no leads. Wade's live-in lover, grief-stricken actress Lizzie Short, claims they were recently engaged, while equally mournful Brodie Kent, a recent housemate of the pair, says he and Wade were lovers; meanwhile, Wade's older brother, Paul, resents his younger sibling's good fortune and lack of support for their financially strapped parents. Only when Woodstock notices that the stab wounds on Miller and Wade seem identical do the two cases take a different turn. Woodstock, introduced in Bailey's debut, The Dark Lake? (2017), is a splendidly complex and fallible character who describes herself as "an exceptional detective but a shitty partner and a barely passable mother" to Ben, the young son she adores, who lives with his father. Readers will want to see more of Woodstock. Copyright 2018 Booklist Reviews.

Set in the author's hometown of Melbourne Bailey's second novel (after ) finds Det. Sgt. Gemma Woodstock and her partner Nick Fleet desperate to solve two murders. The victims&mdash;one an elderly homeless loner, the other a rising star in the movie business&mdash;couldn't be less alike, but each was stabbed once in the heart. The latter case is particularly baffling. Sterling Wade was killed in the street, on camera, in the midst of a zombie attack with hundreds of extras swarming. He was so well liked that finding a motive and narrowing down potential killers is challenging. Gemma recently moved from a small town, and she struggles to find her place in the police department. Her investigating partner's sarcasm is an annoyance, and she misses her five-year-old son, who's back home with her ex. She finds it difficult to give up sleeping with strangers, despite being pursued by a handsome lawyer. Will she place herself and others at risk to solve the crimes? Bailey delineates a host of characters with consummate skill. While the requisite twists are not always startling, the plot is pleasingly complex. Admirers of Nicci French's "Frieda Klein" series will enjoy this absorbing mystery.

The stabbing murder of Sterling Wade, a promising young actor, on a Melbourne movie set kick-starts Australian author Bailey's disappointing sequel to 2017's . Det. Sgt. Gemma Woodstock digs into Sterling's complicated life and unearths several suspects: Brodie Kent, Sterling's roommate and same sex lover; Lizzie Short, Sterling's fiancée; Riley Cartwright, Sterling's drug-addicted director; and Sterling's parents—who are on the brink of declaring bankruptcy and set to inherit his fortune. Meanwhile, Gemma struggles with her hot and cold relationship with partner Nick Fleet, and with her recent gut-wrenching decision to leave her school-age son with his father and move to the city. She's also troubled by the high priority placed on the Wade case at the expense of solving a homeless man's murder. Gemma's case seems to be going nowhere until she discovers evidence that proves Sterling and the homeless man were killed with the same murder weapon. Burdened by too many subplots, the story never gathers much steam and struggles to find its way.

With our blessing: an Inspector Tom Reynolds mysterySpain, Jo