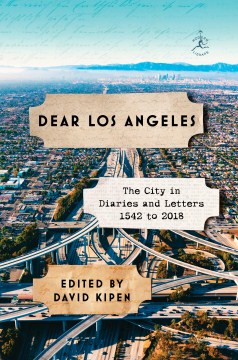 Los Angeles native and book critic Kipen performed a seven-year feat of zealous, far-ranging research ("Everything good in the world comes from either librarians or their patrons.") and editing to create what he describes as "a collective self-portrait of Los Angeles." This irresistible compendium of letter and diary excerpts from an array of voices reaching back to the Spanish missionaries follows the calendar year, but each month contains entries that span decades. March 25 delivers a 1774 note by Juan Bautista de Anza, which the guide to diarists identifies as a Basque explorer and the governor of Spanish-ruled New Mexico, followed by a 1942 entry by Bertolt Brecht about having to register as an enemy alien, and a vivid 1946 dispatch by Eleanor Roosevelt. November 12 stretches from 1854 to 2016. Rapport grows with the diarists who appear throughout the book in which regular folks mix with the likes of Lillian Gish, Dalton Trumbo, Thomas Mann, Raymond Chandler, Octavia E. Butler, Christopher Isherwood, M. F. K. Fisher, and dozens more. This West Coast match to New York Diaries (2012) is lushly rewarding. Copyright 2018 Booklist Reviews.

The love-hate relationship between L.A. and its inhabitants comes alive in this scintillating collection of letters and diary entries. Literary critic Kipen () gathers passages from 16th-century explorers, 18th-century missionaries, 19th-century soldiers, and 20th-century writers, actors, producers, and movie business wannabes. Common themes emerge—golden climate, far-flung geography (Henry Miller: "f you want to take a walk, you get in your car"), Hollywood absurdism (P.G. Wodehouse: "they didn't want what I did, but they paid me $5,000 for something I hadn't done"), the heartbreak of creative differences (F. Scott Fitzgerald: "Oh Joe, can't the producers be wrong? I'm a good writer—honest")—and provoke wildly different reactions from the well-chosen observers quoted. The result is a Los Angeles that's good (Edgar Rice Burroughs: "I never loved any place in my life as I do this"), bad (Westbrook Pegler: "that big, sprawling, incoherent, shapeless, slobbering civic idiot"), ugly (Hart Crane: "this Pollyanna greasepaint pinkpoodle paradise"), and unique (Ryan Reynolds: "People in L.A. are deathly afraid of gluten.... You could rob a liquor store in this city with a bagel"). Readers fascinated by the town will find an engrossing trove of colorful, witty insights here.