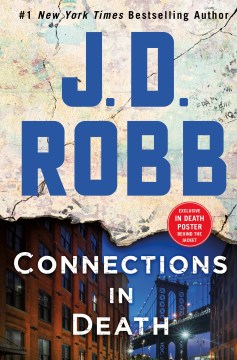 NYPD Lieutenant Eve Dallas knows that most murderers are not geniuses, but whoever killed Lyle Pickering really was an idiot. Although the killer may have tried to make it look like Lyle died of a self-inflicted overdose, all the clues left behind at the crime scene point to murder. Put this together with the fact that Lyle had been clean and sober for two years, and that his sister, Dr. Rochelle Pickering, believes he had turned his life around completely, and Eve has more than enough ammunition to open a new case. Robb, otherwise known as the best-selling romance star Nora Roberts, takes her Teflon-tough heroine into the dark and dangerous world of New York City gangs in the forty-eighth nail-biting addition to the wildly popular Eve Dallas series. Dallas fans will be eager for a new Robb title, and this gritty, intense, and sexy procedural will have them reading way past their normal bedtimes. Copyright 2018 Booklist Reviews.

Robb's () futuristic police procedural universe continues to expand, exploring the connections among its large cast of characters. Anchored by Lt. Eve Dallas of the New York Police and Security Department and billionaire husband Roarke, supporting characters add much-needed depth and humor to the gritty murders that dominate these novels. Robb fleshes out Down and Dirty club owner, Crack, who is dating Dr. Rochelle Pickering, Roarke's newest employee. When Rochelle's brother is found dead of an apparent overdose in her apartment, Eve begins an investigation that leads to the brutal underground of sex clubs, drug dealers, and two of the nastiest rival gangs in 2061 New York. Double crosses and all-around bad behavior abounds as Eve pulls together a large, cross-departmental team to discover why a rehabilitated former gang member's death is the catalyst for a full-out gang war. VERDICT Fast-paced and plot-driven, this 48th book in the series still has plenty of character growth, which should appeal to readers who prefer their procedurals with a touch of romance.

Set in New York City in 2061, bestseller Robb's 48th thriller featuring Lt. Eve Dallas (after 2018's ) offers an unremarkable plot and a future that includes minor technological advances but no evidence of the impact of such major concerns of today as global warming and cyber terror. Eve's husband, Roarke, a businessman and philanthropist, has decided to offer Rochelle Pickering, a highly qualified doctor whose younger brother, Lyle, has served prison time and has a history of substance abuse, the post of head therapist at a new treatment facility for troubled youth in Hell's Kitchen. But before the paperwork for the job offer is finalized, Lyle turns up dead of an apparent accidental overdose in the apartment that he and Rochelle shared. Eve finds evidence of foul play, and the rest of the story unfolds along standard police procedural lines. Those who like steamy sex scenes ("When his release came, it slashed like blades to open him, to empty him") and don't mind underdeveloped characterizations will be rewarded. 750,000-copy announced first printing. Agent: Amy Berkower, Writers House. (Feb.)