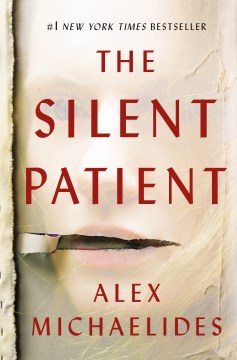 Alicia Berenson is a famous painter, living a life that many envy with her handsome fashion-photographer husband, Gabriel. With a gorgeous house, complete with a painting studio, and that perfect marriage, Alicia couldn't be happier. Until one day Gabriel comes home late from work, and Alicia shoots him in the face. In the brutal aftermath that leads to an indefinite stay in a psychiatric hospital, Alicia mutely accepts her punishment. Forensic psychotherapist Theo Faber is put in charge of her therapy; however, since the night of the shooting, she hasn't spoken a word. With a nod to Greek mythology, art, and love, debut novelist Michaelides effectively blurs the lines between psychosis and sanity. Multiple story lines are told with a writing style that combines past diary entries with present-day prose, becoming more tangled as they weave together, keeping readers on edge, guessing and second-guessing. The Silent Patient is unputdownable, emotionally chilling, and intense, with a twist that will make even the most seasoned suspense reader break out in a cold sweat. Copyright 2018 Booklist Reviews.

All seems well for celebrated painter Alicia Berenson, who lives in a lush London house and is married to an equally celebrated fashion photographer. So why does she shoot him five times in the face one night and refuse to say another word? A big-buzz debut.

DEBUT Psychotherapist Theo Faber is obsessed with the case of Alicia Berenson, an artist convicted of murdering her husband six years ago. Ever since she was found standing over his dead body, splattered with blood, she's remained silent, not even speaking up in her own defense at trial. When the judge sentences her to Grove Psychiatric Hospital instead of prison. Theo sees his opportunity to work with her firsthand, leaving a more prestigious and stable job to work at the financially strapped hospital. Through Theo's first-person narration and excerpts from Alicia's diary that document events taking place before the murder, readers slowly learn about the circumstances leading to the deadly event. As Theo struggles to connect with mute Alicia and secretly conducts his own investigation into her past, he hopes to uncover clues about her marriage and what set off such a violent episode, wrestling with his own psychological demons along the way. Clever plotting, red herrings, and multiple twists ensure most readers will be surprised by the ending of this debut thriller from screenwriter () Michaelides. Dark, edgy, and compulsively readable. [See Prepub Alert, 9/17/18.]

Psychotherapist Theo Faber, the emotionally fragile narrator of Michaelides's superb first novel, finagles his way to a job at the Grove, a "secure forensic unit" in North London, where artist Alicia Berenson has been housed for six years since she was convicted of murdering her prominent fashion photographer husband, Gabriel. The evidence against Alicia was clear—Gabriel was tied to a chair and shot several times in the face with a gun that had only her fingerprints. Since the day of her arrest, Alicia has never said a word. Before the murder, Alicia painted a provocative self-portrait entitled , based on a Greek myth that seemed to echo her life. Her current therapists reluctantly agree to let Theo treat the heavily drugged Alicia to get her to speak. The boundary between doctor and patient blurs as Theo, who admits he became a therapist "because I was fucked-up," seeks to cure his own emotional problems in the course of treating Alicia. This edgy, intricately plotted psychological thriller establishes Michaelides as a major player in the field.