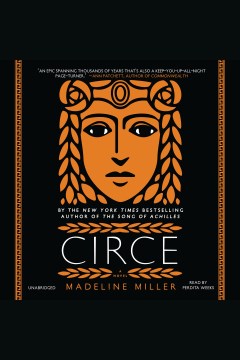 In her stirring follow-up to the Orange Prize–winning The Song of Achilles (2011), Miller beautifully voices the experiences of the legendary sorceress Circe. The misfit daughter of the Greek sun god, Helios, her powers are weak and her speech too much like a mortal's. But her unexpected talents in witchcraft prove threatening to the Titans' realm, leading to her banishment to the remote island of Aiaia. There she resides, carefully perfecting her herb lore, until her solitude is disrupted by visitors both human and divine. With poetic eloquence ("the days moved slowly, dropping like petals from a blown rose") and fine dramatic pacing, Miller smoothly knits together the classic stories of the Minotaur, the monster Scylla, the witch Medea (Circe's niece), events from Homer's Odyssey, and more, all reimagined from a strong-minded woman's viewpoint. Circe's potential rival, Odysseus' wife, Penelope, is another memorable character, and the novel speaks to women's agency, war's traumatic aftermath, and how strength emerges from emotional growth. This immersive blend of literary fiction and mythological fantasy demonstrates that the Greek myths are still very relevant today. Copyright 2018 Booklist Reviews.

Having reinterpreted Homer's in her Orange Prize-winning , Miller now turns her attention to the from the perspective of Circe, the sorceress who changed Odysseus's men into swine. The daughter of the sun god Helios and the nymph Perse, Circe is despised by her parents and siblings for her less-than-divine abilities. Seeking comfort in human companionship, she discovers her own special powers of witchcraft when she turns Glaucus, the mortal man she loves, into a sea god. But Circe's tranformation of Scylla, her rival for Glaucos's affections, into a monster, leads to her banishment to the deserted island of Aiaia. Over the centuries, she hones her magical skills while encountering some of the most famous figures in classical mythology, including the Minotaur, Daedalus, Medea, and, of course, the crafty Odysseus. Along the way, Circe evolves into the powerful witch feared by the Olympian gods. But after a lifetime of lonely immortality, is this enough for Circe? Her final act of transformation will move and surprise readers. This beautifully written and absorbing tale of gods and mortals will delight Miller's many fans and have them reaching for Edith Hamilton's . [See Prepub Alert, 10/22/17; "Editors' Spring Picks," 2/1/17.]

Classics, anyone? Actually, classics, everyone; Miller's last title, , won the Orange Prize and was a best seller. Born into the house of Helios, god of the sun, Circe lacks the power of those around her and prefers human companions. Then she discovers she has the gift of witchcraft and is soon banished to a desert island, where she encounters famed figures in Greek mythology. With a 75,000-copy first printing.

Miller follows her impressive debut () with a spirited novel about Circe's evolution from insignificant nymph to formidable witch best known for turning Odysseus's sailors into swine. Her narrative begins with a description of growing up the awkward daughter of Helios, the sun god. She does not discover her gift for (the art of using herbs and spells) until she transforms her first love, a poor fisherman, into a god. When he rejects her in favor of vain Scylla, Circe turns Scylla into a sea monster. Now considered dangerous, Circe is exiled to an island, where she experiments with local flora and fauna. After returning from a visit to Crete to help her sister give birth to the Minotaur, Circe is joined on the island by errant nymphs sentenced to do their penance in her service. By the time Odysseus's ship arrives, winding its way home from the Trojan War, Circe reigns over a prosperous household. Welcome guests enjoy her hospitality; unwelcome guests are turned into wild pigs. Neither the goddess Athena nor the deadliest poison known to man makes Circe flinch. Weaving together Homer's tale with other sources, Miller crafts a classic story of female empowerment. She paints an uncompromising portrait of a superheroine who learns to wield divine power while coming to understand what it means to be mortal.