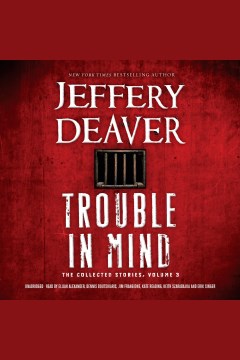 This new collection from the maestro of the plot twist is a no-brainer for fans of tightly plotted short fiction: a dozen stories (some of them previously published) that showcase Deaver's gifts for story construction, character design, and out-of-left-field surprises. In addition to the various stand-alone stories, there's one featuring Kathryn Dance (of the California Bureau of Investigation and the lead character in her own series of novels), another starring John Pellam (the Hollywood location scout who starred in a trio of Deaver's earlier novels), and not one but two with Lincoln Rhyme (the quadriplegic criminalist, and Deaver's most popular character). Although all of the stories are solidly within the crime genre, they range quite a bit: there's a psychological thriller, a femme-fatale story with a noir feel about it, a private-eye tale, other variations on the theme. Deaver's novels, as his fans know, are intricate and deceptive; the most exciting thing about the stories is the way the author carries over the intricacy and deception to the shorter length. Required reading for the author's fans. Copyright 2014 Booklist Reviews.

The 12 tales in bestseller Deaver's third story collection (after 2006's More Twisted) abound in shrewd detection and twists. In "Fast," series lead Kathryn Dance and colleagues attempt to stop a terrorist attack. Another series character, Lincoln Rhyme, figures in "A Textbook Case" and "The Obit." Deaver's fondness for cons and sleights of hand is evident in such selections as "Game," inspired by a real case involving the murder of a New York socialite; "Bump," in which an aging actor agrees to a reality-show poker game; and "The Plot," in which a writer's death seems suspicious to his biggest fan, who's also a homicide cop. Both "The Therapist" and the novella "Forever" pose questions about madness, genius, and whether what appears evil might really be visionary. As Deaver explains in the introduction, he doesn't like loose ends, and he's sometimes overzealous in connecting all the dots. Still, both fans and new readers should be engrossed by these lively tales of crime and deception. Agent: Deborah Schneider, Gelfman Schneider Literary Agents. (Mar.)

This multinarrator effort enlivens the masterful plot twists in Deaver's 12 stories. Among the stories, "Fast" finds investigator Kathryn Dance in a battle of wits with a playful terrorist who won't reveal the whereabouts of a bomb planted in Monterrey, Calif. Narrator Kate Reading does a splendid job of increasing the suspense as the clock ticks. Keith Szarabajka lends a gruff, hardboiled tone to a high-stakes celebrity poker game in "Bump." Dennis Boutsikaris delivers crisp renditions of two yarns featuring the author's most popular hero, Lincoln Rhyme: "A Textbook Case," in which a canny killer checkmates the brilliant paraplegic sleuth's penchant for finding clues by emptying cans of garbage over the crime scene; and "The Obit," in which Deaver finds a unique way of providing readers with a detailed dossier on Rhyme. Boutsikaris also is responsible for the jaunty vocal mood that permeates "Forever," a novella that is the collection's longest, last, and, arguably, best entry. A Hachette hardcover. (Mar.)