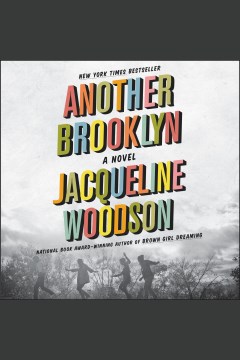 *Starred Review* Best-selling and acclaimed children's author Woodson (Brown Girl Dreaming, 2014) presents an evocative adult novel. August, her memories stirred by running into a friend after her father's funeral, dives headlong back into episodes from her youth. Suddenly, having lived only in Tennessee, eight-year-old August finds herself in her father's hometown of Brooklyn. Stoic young August is bolstered by the responsibility of watching her brother while their father works, and by the certainty that their mother will soon leave Tennessee, too, and join them. From their third-floor window, August and her brother observe the daily despair of poverty, but more notably the world of liberated, unsupervised youth: the skipping rope, the uncapped hydrant, in short, the kids they wish they were. August can't believe her luck when Sylvia, Angela, and Gigi—the very girls she has longed to know—befriend her. The foursome entertain, sustain, and strengthen one another as they move through their early teens in the 1970s, their developing bodies just one of many perils. The novel's richness defies its slim page count. In her poet's prose, Woodson not only shows us backward-glancing August attempting to stave off growing up and the pains that betray youth, she also wonders how we dream of a life parallel to the one we're living. Copyright 2014 Booklist Reviews.

*Starred Review* Gorgeously written and compelling, Woodson's first adult novel in 20 years, shortlisted for the National Book Award, is a gem. As narrated by the talented Miles, it is also an exceptional listening experience. Now 35 years old, August returns to Brooklyn to bury her father and is haunted by her memories of growing up there in the 1960s and '70s. Miles inhabits the complex, introspective, and vividly described August in this first-person narrative and makes listeners privy to her memories, good and bad, of friends, of growing up without her mother, and of coming-of-age in this distinct neighborhood. In her mesmerizing performance, Miles stunningly captures every voice but is especially effective portraying August's three close friends. Miles evokes each character's personality through authentic dialects and accents and captures the mood, cadence, and rhythms of life in that era. She carefully manages the unhurried pace and subtly depicts Woodson's musical style with motifs repeating and growing in importance, as with the oft-repeated question, "When did you know your mother was dead?" Miles' performance highlights Woodson's polished prose and enlivens the vividly drawn characters in this deeply felt, poignant novel. Copyright 2019 Booklist Reviews.

Winner of ALA's Margaret A. Edwards Award for her lasting contributions to young adult literature and author of the New York Times best-selling memoir-in-verse, Brown Girl Dreaming, which claimed the 2014 National Book Award, the Coretta Scott King Award, and a Newbery Honor, Woodson here reveals her tremendous crossover appeal. When protagonist August[?] encounters an old friend, she recalls long-ago days on the verge of adulthood in "another Brooklyn"—a place of warm friendship but also of lost mothers, threatening men, and the possibility of tragedy.

With spare yet poetic writing, this long-awaited adult novel by National Book Award winner Woodson (Brown Girl Dreaming) is a series of vignettes narrated by August, shortly after her dad's funeral and a chance encounter with an old friend. Reminiscing about the 1970s leads August to rediscover the nervousness she felt after her dad relocated her and her younger brother to Brooklyn amid a heroin epidemic, and how she always hoped her mom, who is haunted by her own brother Clyde's death in Vietnam, would arrive soon. Forever feeling like an outsider, August unexpectedly found sisterhood with Sylvia, Angela, and Gigi. Woodson movingly chronicles the ups and downs of friendship as the girls discuss everything from their hopes and dreams to their varying shades of blackness. While her dad and brother sought solace in the Quran, August still longed for a sense of belonging. Woodson seamlessly transitions her characters from childhood to adulthood as August looks back on the events that led her to become silent in her teen years, eventually fleeing Brooklyn and the memories of her former friends. VERDICT An evocative portrayal of friendship, love, and loss that will resonate with anyone creating their own identity and will have YA crossover appeal. [See Prepub Alert. 2/8/16.]—Stephanie Sendaula, Library Journal

August, an Ivy League-pedigreed, peripatetic anthropologist who studies death in the farthest reaches of the world, returns home to Brooklyn to bury her father. A chance subway meeting with a childhood friend plunges August back into memories of another Brooklyn of the 1970s, when she was eight and her brother was four. They were newly arrived from Tennessee, lost without a mother, left alone by a father working hard to support and protect his remaining family. August comes of age as part of a quartet of local girls, along with Sylvia, Angela, and Gigi; amidst their dreams of becoming a lawyer, dancer, actress, each must fight the too-eager boys, the abusive men, and the suffocating expectations designed to ensnare their vibrant determination to survive—and achieve. Following , which won the young adult National Book Award, Woodson's first adult novel in 20 years is a revelatory record of memory lost and found, of girlhood examined from adulthood, of families born and families chosen, of mutable relationships and everlasting bonds. Narrator Robin Miles's rich elocution adds nuanced depth to Woodson's already magnificent prose. A gorgeous, necessary acquisition for every library. ["An evocative portrayal of friendship, love, and loss that will resonate with anyone creating their own identity": 6/15/16 starred review of the HarperCollins hc.]

In her first adult novel in 20 years, acclaimed children's and YA author Woodson (winner of the National Book Award for her last book, Brown Girl Dreaming) combines grit and beauty in a series of stunning vignettes, painting a vivid mural of what it was like to grow up African-American in Brooklyn during the 1970s. When August, an anthropologist who has studied the funeral traditions of different cultures, revisits her old neighborhood after her father's death, her reunion with a brother and a chance encounter with an old friend bring back a flood of childhood memories. Flashbacks depict the isolation she felt moving from rural Tennessee to New York and show how her later years were influenced by the black power movement, nearby street violence, her father's religious conversion, and her mother's haunting absence. August's memories of her Brooklyn companions—a tightly knit group of neighborhood girls—are memorable and profound. There's dancer Angela, who keeps her home life a carefully guarded secret; beautiful Gigi, who loses her innocence too young; and Sylvia, "diamonded over, brilliant," whose strict father wants her to study law. With dreams as varied as their conflicts, the young women confront dangers lurking on the streets, discover first love, and pave paths that will eventually lead them in different directions. Woodson draws on all the senses to trace the milestones in a woman's life and how her early experiences shaped her identity. (Aug.)