The girl with all the gifts [electronic resource]. M. R Carey. 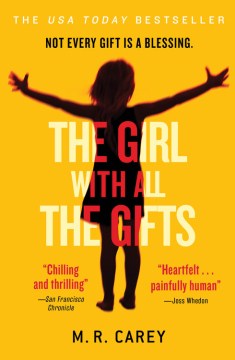 *Starred Review* Just when it feels as though the zombie fad may be dying out, this well-executed thrill ride of a novel comes along to resuscitate the genre. Melanie is a gifted child—thoughtful and curious, with a genius-level IQ. She's also a zombie. Every day, she is released from her cell to attend class with a few dozen other students held at the military compound they call home. They read Greek myths, learn fractions, and have storytime with the loving and patient Miss Justineau—all while muzzled and strapped to their desks. The children are being carefully studied by Dr. Caldwell, a scientist who is determined to uncover why these children are able to think and learn. After all, when the zombie apocalypse occurred (in a frighteningly possible manner), 90 percent of the population ended up as "normal" zombies—completely brain-dead, no human traits left. When the base is attacked, a ragtag group of survivors find themselves on the run to Beacon, just outside of London, which may or may not be the last surviving city. Melanie is among them, as she is Caldwell's most precious test subject. Carey's cinematic scenes unfold at just the right pace, and he infuses all of his characters—even the undead—with personality and emotion. This unique and terrifying tale is a must-read for any fan of zombie fiction or postapocalyptic dystopian novels. Copyright 2014 Booklist Reviews.

Melanie can't remember life before she came to the base, but she hopes that when the mission is over she can live a normal life in Beacon, the city that developed in the 20 years since the hungries ravaged England. For now, life for the girl is contained in her cell, the corridor, the shower room, and the classroom. When the base is attacked, Melanie and her favorite teacher, Miss Justineau, escape with the mysterious Sergeant and Dr. Caldwell, the scientist experimenting on the children. As they head to Beacon, Melanie begins to realize that she is not like the others and wonders if the life she dreamed of can ever be a reality. VERDICT Like Max Brooks did with World War Z, Carey (Lucifer; Hellblazer) turns the zombie genre on its head. While the setting is a stark dystopian future teeming with undead, this moving story's real focus is the relationships and growth of the characters, not who or what they are. In a packed field, this fast-paced and haunting tale is sure to stand out.—Portia Kapraun, Monticello-Union Twp. P.L., IN

Comics writer Carey (Lucifer) delivers an entertaining take on several well-worn zombie tropes. Years after the requisite zombie apocalypse (this time caused by a mutant strain of an ant-killing fungus, probably the book's most original touch), scientists in a remote outpost in England are working on a cure by experimenting on a group of zombified children who retain some of their original emotions and cognitive functions. Although Carey piles on the clichés (beyond the apocalypse and the recently trendy intelligent zombies, there are rogue survivalists straight out of The Walking Dead, scientists willing to cross ethical lines, and the ever-silly notion that people would use any term other than "zombies" to refer to the undead), he builds well-constructed characters—particularly Melanie, one of the zombified children, who comes across as cognitively and emotionally different from the other characters, without feeling like an offensive parody of a person with Asperger's. The requisite action sequences are also well constructed, and the book will appeal to fans of zombie fiction. (June)

The reapers are the angelsBell, Alden