The buddha in the attic [electronic resource]. Julie Otsuka. 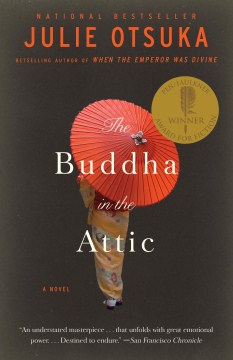 "*Starred Review* Otsuka's stunning debut, When the Emperor Was Divine (2002), a concentrated novel about the WWII internment of Japanese Americans, garnered the Asian American Literary Award, the ALA Alex Award, and a Guggenheim. Her second novel tells the stories of Japanese mail-order brides at the start of the twentieth century in a first-person-plural narrative voice, the choral "we." This creates an incantatory and haunting group portrait of diverse women who make the arduous ocean journey to California buoyant with hope only to marry strangers nothing like the handsome young men in the photographs that lured them so far from home. Prejudice and hardship soon transform the brides into fingers-worked-to-the-bone laborers, toiling endlessly as domestic workers, farmers, prostitutes, and merchants. Every aspect of female life is candidly broached in Otsuka's concise yet grandly dramatic saga as these determined, self-sacrificing outsiders navigate the white water of American society, only to watch their American-born children disdain all things Japanese. Drawing on extensive research and profoundly identifying with her characters, Otsuka crafts an intricately detailed folding screen depicting nearly five decades of change as the women painstakingly build meaningful lives, only to lose everything after Pearl Harbor. This lyrically distilled and caustically ironic story of exile, effort, and hate is entrancing, appalling, and heartbreakingly beautiful." Copyright 2011 Booklist Reviews.

In her widely admired debut novel, When the Emperor Was Divine, Otsuka portrayed the internment of Japanese Americans during World War II. Here she retreats a few steps, following a group of Japanese women who travel to early 1900s San Francisco as mail-order brides. Given the success of Emperor, it's no surprise that this new work is getting a 75,000-copy first printing, a reading group guide, and a seven-city tour. I'm looking forward to this one.

In her acclaimed When the Emperor Was Divine, Otsuka wrought third-person narratives of a northern California Japanese family facing internment and alienation during World War II. Now she gives us a luminous second novel, setting off from the early 20th century on a ship of "picture brides" headed from Japan to San Francisco to meet Japanese workers who have arranged to marry them. Otsuka works an enchantment upon her readers—no Sturm und Drang here—and leaves us haunted and astonished at the powers of her subtlety and charms. This time she employs a choral-like narrative expressed in the third-person plural, with a gentle use of repetitive phrasing ("One of us…"; "Some of us…") punctuated by small, italicized utterances representing individual voices. The results are cumulatively overwhelming, as we become embedded in the hope, disenchantment, courage, labor, and resignation of these nameless women and their families across four decades. Did they think all their compromises, their search for community, meant that they had found a place here in America? Or, just as they had been upon their arrival in California, were they mistaken about what this land had to offer them? VERDICT Unforgettable and essential both for readers and writers. [See Prepub Alert, 2/14/11.]—Margaret Heilbrun, Library Journal

Memoirs of a geishaGolden, Arthur, 1957-

Rosebud and other storiesYamauchi, Wakako