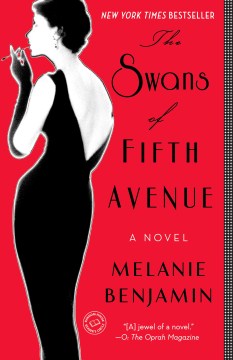 Best known for The Aviator's Wife, which dwelled on the New York Times extended best sellers list for three months, Benjamin here offers something even juicier: fiction about Truman Capote's relationship with diamond-bright Babe Paley and other high-society "swans" in 1950s New York.

The dazzling world of the elite in 1950s and 1960s New York is the setting for this fourth novel by best-selling historical fiction author Benjamin (The Aviator's Wife). Riding high on his early literary successes, Truman Capote delights in the company of his "swans," a circle of wealthy married women attracted to both his impish charisma and his love of good gossip. Chief among these women is Barbara "Babe" Paley, the always immaculately dressed and groomed wife of CBS president William S. Paley, who allows herself to be vulnerable around Capote in a way she can never be with her powerful husband. When a desperate Capote betrays his swans by publishing their darkest secrets, friendships crumble and hearts break. VERDICT Fans of vintage New York glamour who loved books such as Amor Towles's Rules of Civility will relish this chance to experience vicariously the lives (and fashion choices!) of the city's rich and famous. Benjamin convincingly portrays a large cast of colorful historical figures while crafting a compelling, gossipy narrative with rich emotional depth. Highly recommended. [See Prepub Alert, 7/6/15.]—Mara Bandy, Champaign P.L., IL

In 1975, a clique of Manhattan socialites discover that literary lion Truman Capote revealed their dirtiest laundry to the world in a story published to great fanfare in Esquire—a real-life event that inspires this novel. As the women (the metaphorical swans of the novel's title) face his perfidy, they attempt to untangle an intimacy with Capote that dates back to 1955. Though Marella Agnelli, C.Z. Guest, Gloria Guinness, Pamela Churchill Harriman, and Slim Keith all feel betrayed, it's style icon Babe Paley who suffers most. Unconventional, brilliant, and voraciously ambitious, Capote seems an unlikely confidante for a woman celebrated solely for marrying, living, and looking well, but the loneliness and insecurity the two both hide forges a deep bond. Babe trusts "True Heart" enough to reveal shameful secrets, from her false teeth to her powerful husband's sordid philandering; tragically, if predictably, Capote's desperation for writing fodder proves more powerful than love. Benjamin's (The Aviator's Wife) fact-based narrative captures the era's juiciest scandals and wildest extravagances, but readers expecting the sympathetic protagonists of her earlier books may be disappointed by the diffuse and chilly cast of characters here. With an unabashed delight in bitchy gossip and lavish lifestyles, the novel's themes are sober ones: the double-edged power of telling our stories, the ways we test and punish those we love, and the psychic cost of life lived by the mantra "appearance matters most." (Jan.)

A touch of stardustAlcott, Kate