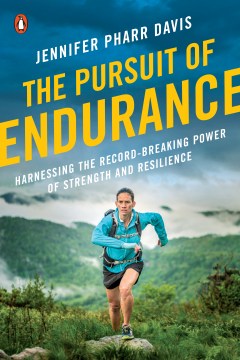 In this follow-up to her memoir Becoming Odyssa: Epic Adventures on the Appalachian Trail (2010), which recounts her experience as the first female to set the overall record for speed-hiking the Appalachian Trail, Davis explores what drives people to succeed (and fail) at conquering record-setting feats on this and similarly famous footpaths. Davis proves to be a gifted storyteller, introducing readers to such legendary hikers and recorders of FKTs (fastest known times) as Warren Doyle, David Horton, and Andrew Thompson. This is not, however, a how-to book with secrets of getting through the trail quickly but, rather, a provocative exploration into what motivates people to endure such challenges. There is no single answer, but the superperformers do share similar traits. Recreational athletes will enjoy this as much as ultra runners, who already know that spending time in the wilderness nurtures a greater self-understanding. Readers interested in the Appalachian Trail or the Pacific Crest Trail will certainly appreciate Davis' unique perspective, and the lessons she shares are applicable to personal experiences as well as athletic endeavors. Includes a bibliography and suggestions for further reading. Copyright 2018 Booklist Reviews.

In 2011, after reaching the end of the Appalachian Trail (AT), which runs from Georgia to Maine, with a fastest known time (FKT) record, Davis (National Geographic Adventurer of the Year) began researching the many facets of the 2,181-mile-long trek, including its history and the people who have hiked the trail before her. She also considers the physical and mental anguish, variable weather conditions, and long lengths of solitude in nature. Davis is interested in discovering whether there are certain types of persons better suited for the trek. While meeting with several of the past FKT record holders from the AT, as well as the Pacific Crest Trail, the author learned about their lives and what drives them to hike (in some cases run) long distances. She reveals a cast of characters from all walks of life with myriad inspirational tales, who show that endurance comes from many places. But a person's background, gender, diet, and religious beliefs ultimately do not have an overall impact on their success. For readers interested in hiking, endurance sports, or anyone with a strong drive to do something different. A truly inspiring read.

Long-distance hiker Davis delivers a volume that is more a journalistic exploration of the history and personalities behind the fastest-known-times phenomenon than the self-help treatise seemingly promised by the title. In 2011, Davis set—and still holds—the fastest known time (FKT) for women hiking the Appalachian Trail: 46 days, 11 hours, 20 minutes—an average of 47 miles per day. Having been mentored by five male Appalachian and Pacific Coast Trails FKT-ers, Davis was curious whether certain personalities, or sexes, are better suited for the long haul. To that end, she serves up chapter-length profiles of her mentors, including "The Mainstream Masochist" (exercise science professor David Horton), "An Unapologetic American Male" (the John Wayne–like Andrew Thompson), and "The Genuine Celebrity" (bestselling author Scott Jurek). She goes light on science, but posits that endurance is about embracing failure and "trusting the invisible voice you believe in, even if nobody else does," stating that it "isn't a human trait, it is the human trait... we exist only as long as we persist." At times reminiscent of the writings of such travel memoirists as Cheryl Strayed and Bill Bryson, this inspiring work could become a regular companion for distance hikers or, indeed, for anyone embarking on a personal challenge. (Apr.)

The rise of the ultra runners: a journey to the edge of human enduranceFinn, Adharanand

Natural born heroes: how a daring band of misfits mastered the lost secrets of strength and enduranceMcDougall, Christopher, 1962-

My life on the run: the wit, wisdom, and insights of a road racing iconYasso, Bart

Let your mind run: a memoir of thinking my way to victoryKastor, Deena

Eat and run : my unlikely journey to ultramarathon greatnessJurek, Scott, 1973-

26 marathons: what I learned about faith, identity, running, and life from my marathon careerKeflezighi, Meb

The lure of long distances: why we runHarvie, Robin
Long road to Boston: the pursuit of the world's most coveted marathonSutcliffe, Mark, 1968-