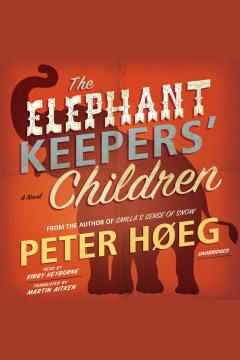 Danish author Høeg is best known for Smilla's Sense of Snow, but don't expect another taut mystery. This title is a zany adventure story with spiritual overtones that features three precocious siblings and their dog. Peter, Tilte, and Hans's parents have gone missing. Their father is a minister on the tiny, fictional Fino Island and their mother is the organist with a deep interest in science. Fearing their parents are involved in a plot to steal religious relics, the children set out to locate them before the heist. Characters with playful names like Alexander Flounderblood and Rickardt Three Lions abound, and the action is nonstop as the siblings try to figure out what their parents are up to. Overlying all are deep questions about spiritual freedom, love, parenting, and the nature of life. Tilte calls her parents "elephant keepers," meaning that they have a huge unfulfilled desire—their yearning to know God. Reader Kirby Heyborne beautifully captures the voice of Peter in this elegantly crafted yarn. VERDICT This contemplative, farcical, and well-written title is highly recommended.—Judy Murray, Monroe Cty. Lib. Syst., MI

This quirky, philosophical Danish tale concerns two children, 14-year-old Peter and his older and very mature sister, Tilte, who go on the run from the authorities and various other eccentric and fancifully named characters following their parents' mysterious disappearance. The parents work in their hometown church on a fictional island off the coast of Denmark, where miracles may have occurred during the father's sermons; lately, they have become involved with shady business dealings as well. Piecing together clues left behind, the children learn that a major religious conference is scheduled to take place in Copenhagen and that a theft of priceless religious artifacts may be in the works. Peter and Tilte have a precocious philosophical bent, evidently having spent countless hours researching mysticism and spiritual theology, notions of which are sprinkled liberally throughout young Peter's first-person narrative. VERDICT This is an enjoyable and interesting novel, but the appeal may be limited, since it is densely written and requires an effort. Høeg, the author of the brilliant Smilla's Sense of Snow, has adopted a comic voice, and one wonders at times how accurately the translation has preserved his original intentions. [See Prepub Alert, 6/15/12.]—Jim Coan, SUNY at Oneonta Lib.

Readers who expect another taut, chilling literary thriller by the author of Smilla's Sense of Snow are in for a surprise. A thriller of sorts this is, but it's more humorous than frightening, more of a caper than a mystery, and more of a coming-of-age story than a suspense yarn. Precocious 14-year-old Peter relates the mysterious events surrounding the disappearance of his parents in a shaggy dog tale full of digressions, adolescent humor, and philosophical musings. Peter's father is the vicar of the church on tiny Fino island, off the Danish coast; his mother is the church organist and a computer whiz advising the people who are planning a Grand Synod that will bring leaders of every religion, including the pope and the Dalai lama, to Copenhagen. Eccentric in the extreme, the parents have always been mysterious to their children, but when they go missing, Peter and his older siblings, Tilte and Hans, fear that they're involved in a plot to steal religious relics. The tone throughout is jauntily farcical, including characters Bodil Hippopotamus, Alexander Flounderblood, and Anaflabia Borderrud, whose nomenclature would make Dickens blush. The action is nonstop and zany. A corpse pops in and out of a wheelchair, a castle tunnel is oiled with soft soap, chases end in dead ends, and one dangerous confrontation follows another, all ending in general mayhem. Peter is an engaging narrator; irreverent, insistently confidential, he's prone to describing metaphysical states in which one can achieve spiritual peace. He calls his parents "elephant keepers" because "they want to know what God really is." It turns out that nearly all the characters are elephant keepers of one sort or another, in Peter's estimation. Under the madcap adventure story Hoeg poses serious issues about neglected children, venal church officials, and the paths to intellectual and spiritual freedom. (Oct. 23)