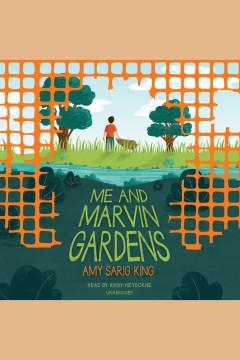 Sixth-grader Obe Devlin doesn't run with the popular crowd. He's more concerned with keeping his creek clean, finding rocks for busmate Annie Bell's collection, and not having nosebleeds all over his clothes—a consequence of said unpopularity. Housing developments are rapidly, and upsettingly, encroaching on the acres of land that once belonged to the Devlin family, and Obe's one friend chooses to hang with the new kids. On a routine creek visit, Obe discovers a capybaralike animal that only eats plastic, which he names Marvin Gardens. Obe keeps Marvin a secret until neighborhood vandals threaten the creature's safety, prompting Obe to tap into his Devlin fierceness and take a stand. This is acclaimed YA author King's first foray into middle-grade territory, and it's no surprise that she adeptly handles issues like bullying, compromised friendship, complex family dynamics, and the tedium of homework. Obe's connection to the land courses through the book and is firmly rooted in Devlin family history. Drawing upon the tradition of Carl Hiaasen's Hoot (2002), this eco-focused story will tug at readers' consciences and heartstrings. Copyright 2016 Booklist Reviews.

Sixth grader Obe lives at the edge of a massive housing development being built on land that once belonged to his mother's family. One day he spies a strange creature whose favorite food is plastic and whose scat is toxic. A. S. King's middle-grade debut is a smart, environmentally conscious underdog story with a little sci-fi and a lot of heart. Copyright 2017 Horn Book Guide Reviews.

The middle-grade debut of YA novelist A.S. King (Still Life with Tornado, rev. 9/16) was bound to be a little weird--and it is. It's also a smart, environmentally conscious underdog story with a lot of heart and a little sci-fi. Sixth-grader Obe lives with his parents and older sister at the edge of a massive housing development being built on land that once belonged to his mother's family, the Devlins. Obe is an outcast at school, nicknamed "the hippie" and bullied by his former best friend Tommy's new crew. While picking up trash from Devlin Creek, Obe spies a strange creature: "It was definitely not a dog. It was definitely not any animal I ever read about…What was this thing?" Obe soon befriends the "animal/ creature/monster/thing" and names it Marvin Gardens. Marvin's favorite food is plastic, and its scat is toxic. When Tommy's gang gets wind of the creature, Obe realizes it's up to him to protect Marvin. Interspersed chapters flash back a century to the story of Obe's great-grandparents (his great-grandfather "drank 175 acres of Devlin land"), helping contextualize events. To a person (and a creature), the characters are rewardingly complex. Through Obe, King asks the Big Questions ("One hundred years from now…would people live a different way--a way that helped the planet?") alongside the smaller, more personal ones (can Tommy be trusted?) in a way that will likely have readers doing the same. elissa gershowitz Copyright 2016 Horn Book Magazine Reviews.

Obe Devlin, 11, lost his only friend when new kids moved into subdivisions named for the things their homes displaced—Pheasant's Nest, Oak Trail, the Orchards—on farmland that once belonged to his family. A perceptive narrator, Obe finds solace at the creek that runs through the slice of property his parents still own, which is where he first spots a strange animal whose most notable feature is his diet: plastic litter. Obe, whose father employs a win-at-all-costs strategy during family Monopoly games, names the critter Marvin Gardens but keeps him a secret—which turns out to be an especially wise move once he realizes that the animal produces highly noxious (and possibly toxic) scat. King (Still Life with Tornado) leavens a story replete with brutal environmental facts with a magical friendship between a boy and his "pretty gross pet." A provocative exploration of human action and interaction on both local and global levels, as well as the interplay between past, present, and future, King's novel will leave readers pondering how we treat each other and the planet. Ages 8–12. Agent: Michael Bourret, Dystel, Goderich & Bourret. (Jan.) Copyright 2016 Publishers Weekly.