The girl in the glass box / James Grippando. 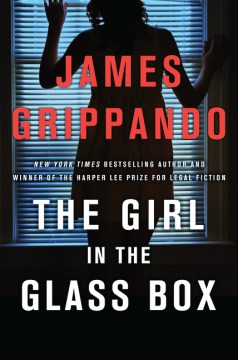 A woman living in Florida illegally is turned in to the immigration department by a man bearing a grudge. The woman is put into a detention center; her teenage daughter barely escapes and hides out at her aunt's house; Jack Swyteck, the lawyer who's toplined Grippando's series of smartly written legal thrillers, hears about the situation from his grandmother and signs on, free of charge, to help get the girl's mother released. But here's the problem: the mother is making accusations that are very hard to prove, against people who have very strong reasons for wanting certain secrets to stay buried, and Jack's own safety, not to mention his family's, is soon in jeopardy. Grippando, a former attorney, has the legal stuff down cold, and his writing style is impeccable (he won the 2017 Harper Lee Prize for Legal Fiction for Gone Again, a Jack Swyteck novel). This would be a perfect time for legal-thriller fans who haven't yet checked out this series to join the crowd. Copyright 2018 Booklist Reviews.

In this timely new thriller from the 2017 winner of the Harper Lee Prize for Legal Fiction, Julia Rodriguez and her teenage daughter have fled violence both gang-related and domestic in El Salvador and landed in Miami. An anonymous tip leaves Julia awaiting deportation, with Miami attorney Jack Swyteck thinking that asylum (now so tricky) is her only option. With a 75,000-copy first printing.

In Grippando's latest "Jack Swyteck" thriller (after ), the Miami attorney is asked by his beloved to defend Julia Rodriguez, a less-than-forthcoming immigrant from El Salvador who's facing deportation after she entered the United States illegally to escape an abusive husband. The case is complicated by a hardline U.S. attorney, Rodriguez's troubled teenage daughter and unsympathetic sister, and several murders that implicate them all. Grippando weaves immigration law and policy, domestic abuse, and other current social issues into a story that will quickly capture and keep the attention of readers who may be compelled to read this plot-driven legal thriller in one sitting. A solid addition for fans of Swyteck that works well as a stand-alone for those unfamiliar with the series. It will also appeal to admirers of Phillip Margolin, Alafair Burke, and William Bernhardt. [See Prepub Alert, 8/10/18.]

Julia Rodriguez, an undocumented immigrant from El Salvador, works as a barista in a Miami café, in bestseller Grippando's timely 16th Jack Swyteck novel (after 2018's ). When she refuses the sexual advances of her boss, he reports her to ICE, and she's soon arrested by ICE agents, but her daughter, Beatriz, a ninth grader, avoids capture. Attorney Swyteck takes on the challenging task of securing Julia's release from detention and reuniting her with Beatriz. Julia had fled to America to escape her abusive, gang-member husband, Jorge, but he soon followed her to Miami and will stop at nothing to get her back. Grippando keeps the narrative moving forward at a steady clip, expertly interweaving each character's point of view into the plot. He brings to life the fear undocumented immigrants face every day, as well as the complicated legalities they confront when arrested. Still, he never forgets that this is a thriller, and Jorge's ruthless momentum keeps the tension building to a heart-racing climax. Agent: Richard Pine, Inkwell Management. (Feb.)

Shadow of the rock: a Spike Sanguinetti novelMogford, Thomas