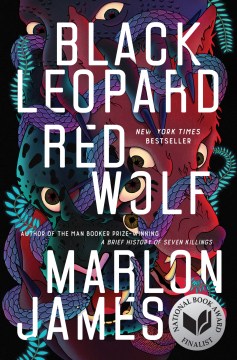 The first installment in the Dark Star trilogy has been touted as "an African Game of Thrones, and, indeed, James, author of the Man Booker Prize winner A Brief History of Seven Killings (2014), throws pretty much every fantasy and horror creature known into this brilliantly chaotic mash-up of genres and styles. Readers will discover mermaids, vampires, zombies, and witches, along with edge-of-your-seat chills and cheeky humor. James' tale digs its hooks in and never lets go, rather like the claws of the flesh-eating Zogbanu trolls, or the teeth of a vicious ghommid. Yet for all the fantasy and action, James never loses sight of the human story as his hero, Tracker, searches for the truth about a mysterious boy. Tracker's quest across wildlands and through cities brings him tantalizingly closer to the elegant, shape-shifting Leopard. James' world building weaves in cultural references from Sudan, Ethiopia, Nigeria, Mali, Congo, Burkina Faso, and Senegal as he spins his griot's tale of love, revolutions, murder, and magic. Gender-bending romance, fantastical adventure, and an Afrocentric setting make for an inventive and engaging read. HIGH-DEMAND BACKSTORY: The buzz is growing, thanks to James' powerful draw and the launch of a trilogy with appeal for fans of Afrofuturism and Black Panther. Copyright 2018 Booklist Reviews.

Evocative language, intensive architecture, an epic sensibility, and a strong feeling of time and place: the qualities defining the Man Booker Prize-winning should make for great fantasy, even if this first book in a trilogy goes its own special way. At its heart is Tracker, asked to find a boy who disappeared three years previously and nonplussed to find himself attached to a search party. Drawing on African mythology; I love Marlon James!

As with his Man Booker Prize-winning , James's first foray into fantasy demonstrates epic sweep, an intensely layered structure, and raw if luscious language that pins readers to the page with enough concrete detail to discourage a breezy skim-through. Placed firmly in the genre by its dark magic, unstoppable twists and turns, dangerous kingly aspirations, and imperfect but essential fellow-creature bonding, the narrative is refreshingly distinctive in its grounding in African history and folklore. Its protagonist is the Tracker, a tough-talking loner whose sense of smell leads him to his quarry and here to a momentous task. The opening pages show the Tracker as a young man leaving home both to escape his family and confront his people's enemies, as he refines his skills, discovers a shocking secret about his parentage, helps a group of children (e.g., Smoke Girl, Giraffe Boy) abandoned for their weirdness as cursed, and meets the sardonic, shapeshifting Leopard, with whom he forms a close but testy relationship. But the journey's the thing, as the Tracker is later engaged by a slaver to find a kidnapped child, reputedly the son of a North Kingdom elder who riled the king and was slaughtered with his family. In his efforts, the Tracker grudgingly allows himself to be joined by the Leopard, the Moon Witch Sogolon, the perfidious Nyka, and others. As they move through the Darklands and subsequent fraught territories toward the Southern Kingdom, they encounter witches and demons, flesh-eating trolls, splendidly dressed mercenaries, vampires, necromancers, ancient griots, and a wise, magisterial buffalo. References to harsh pansexual encounters often shift events forward, and the entire story is framed as a tale told to an inquisitor, though we are a long way from understanding from whence he came—this is the first in the "Dark Star" trilogy. As the Tracker realizes, "," and it's the same for readers. Highly recommended for fantasy lovers who welcome a grand new challenge, as James launches an unglorified if gloriously delivered story that feels eminently real despite the hobgoblins, and for literary readers, eager to see the world—and James's particular talents—in a new light. [See Prepub Alert, 7/31/18; Editors' Spring Picks, p. 22.]

Booker winner James () kicks off a planned trilogy with a trek across a fantastical Africa that is equal parts stimulating and enervating. Centering on the search for a lost boy, the plot is relatively straightforward, though the narrator, Tracker, moves his story obliquely "as crabs do, from one side to the next." Tracker is a "hunter of lost folk," an ornery loner with an extraordinary nose that lets him pick up the scent of his quarry from miles away. Along with several other mercenary hunters, he is hired by a slave trader to find a kidnapped boy, though who the boy is and why he is so valuable are mysteries to Tracker. Storytelling is a kind of currency in this world, as people measure themselves not only by their violent feats but also by their skill in recounting them, and they have plenty of material: giants, necromancers, witches, shape-shifters, warring tribes, and unspeakable atrocities. Indeed, there is a narrative glut, which barely lets readers acclimate to a new, wondrous civilization or grotesque creation before another is introduced. It's altogether overwhelming, but on the periphery of the novel are intriguing ideas about the performance of masculinity, cultural relativism, kinship and the slipperiness of truth. Though marred by its lack of subtlety, this is nonetheless a work of prodigious imagination capable of entrancing readers.

The sorcerer of the wildeepsWilson, Kai Ashante

The rage of dragonsWinter, Evan

The priory of the orange treeShannon, Samantha, 1991-