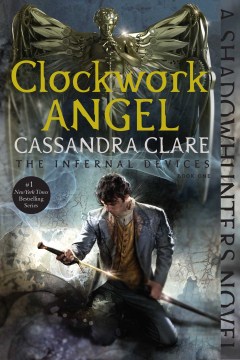 After journeying from New York to Victorian London in search of her brother, 16-year-old Tessa Gray is kidnapped by the loathsome Dark Sisters, who forcibly train her to use powers she never knew she possessed. Then two mysterious, striking young men whisk her away to the safety of the Institute, a base for demon-hunting warriors, the Shadowhunters, who introduce her to a paranormal world of demons, supernatural beings, and half-angel Nephilim. Tessaâ€™s unique powers to shape-shift make her incredibly valuable to both sides in a battle between the Shadowhunters and the Magister, who controls an army of clockwork automatons. Breathlessly melodramatic but compulsively readable, this is the first title in a new, companion series set 100 years earlier than the authorâ€™s bestselling Mortal Instruments books. Packed with battles, romantic entanglements, and tantalizing foreshadowing, this will have readers clamoring for the next installment. Although prior knowledge of the Mortal Instruments books isnâ€™t necessary to enjoy this title, you can bet your sword newcomers to the world will be rushing to read what theyâ€™ve missed. Copyright 2010 Booklist Reviews.

Prim, bookish sixteen-year-old Tessa discovers she can shape-change. Only the demon-fighting Shadowhunters, kindhearted Jem, and cruel, handsome Will, can protect her from the supernatural underworld. Steampunk elements and the gritty Victorian London setting distinguish this prequel from the Mortal Instruments series; some plot elements are unoriginal or recycled. Nevertheless, fans will enjoy this page-turning urban fantasy. Copyright 2011 Horn Book Guide Reviews.

Clare rose to fame with the best-selling "Mortal Instruments" trilogy. In this first book in a new series, she introduces Tessa Gray, an orphaned American traveling to Victorian England to find her wastrel brother, Nate. Upon disembarking, Tessa is kidnapped by the Dark Sisters, who skin innocents in their basement and who teach her that she is possessed of very powerful magic. Tessa is rescued from an ugly fate by the Shadowhunters-defenders of all that is good-and joins their search for the Magister behind an army of demonic automatons. As Tessa (now a newbie warlock) is drawn romantically to a handsome and brooding member of their motley crew, engaging characters and clever twists of plot overcome the melodrama. Readers will pine for the next foray into this world. Angelina Benedetti, "13 Going on 30", Booksmack! 10/21/10 (c) Copyright 2010. Library Journals LLC, a wholly owned subsidiary of Media Source, Inc. No redistribution permitted.

This first book in Clare's Infernal Device series, a prequel to her bestselling Mortal Instruments books, opens as Tessa's pleasant life in 1878 New York is coming to an end when her guardian aunt dies. Upon her arrival in London, where her brother lives, Tessa is kidnapped by the Dark Sisters, who force her to learn to use a rare power--shape-shifting--she didn't know she had. Her rescue by a young man named Will leads her to the Shadowhunters--Nephilim descended from humans and angels--who enforce the magical Accords against demons and other creatures. Tessa gets caught between the various players seeking to use her amid a plot to conquer Britain. The events often read as bleakly as the Victorian London weather, punctuated by Clare's trademark humor, empathy, and authentic characters, who fight their own flaws and tragic pasts as often as they do evil. Mysteries, misdirection, and riddles abound, and while there are some gruesome moments, they never feel gratuitous. Fans of the Mortal Instruments series and newcomers alike won't be disappointed. Ages 14–up. (Aug.)

A great and terrible beautyBray, Libba

Prophecy of the sistersZink, Michelle