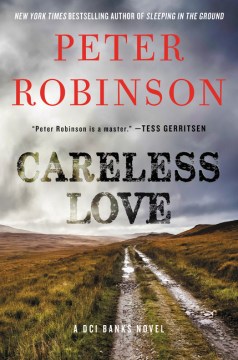 Yorkshire police make two unsettling discoveries within days of each other in the latest Alan Banks mystery, the twenty-fifth starring the former detective chief inspector and now detective superintendent. The first discovery is the body of a 19-year-old student, dead at the wheel of a Ford Focus, in a remote valley of the Yorkshire Dales. The woman seems to have been killed somewhere else and then placed in the vehicle. The second discovery is that of a man, apparently dead from a fall off a hiking trail on the moors, wearing oddly formal clothes for this rugged hiking area. Banks, assisted by series heroine and his onetime lover, Detective Inspector Annie Cabot, takes on both cases, which span out into a larger case masterminded by one of their old nemeses, who seems to be messaging them through murder. As usual, Robinson provides a solid police procedural enhanced by the rugged Yorkshire setting. Banks himself—jazz- and solitude-loving, difficult, somewhat melancholic, unlucky in love—is always fascinating. Robinson doesn't give much help to new readers, but, for series fans, this one is a sure bet. Copyright 2018 Booklist Reviews.

Inspector Alan Banks is puzzled when an apparent suicide is found in an abandoned car on a little-traveled road&mdash;the victim can't drive. Then a well-dressed man lacking any identification is discovered in a moorland gully, dead from what could be a slip or a push. From a best-selling author with Edgar, CWA Dagger in the Library, and Sweden's Martin Beck honors.

Two suspicious deaths in as many days, seemingly unrelated, have Leeds DCI Alan Banks and his team working to find out what happened to the deceased. The first victim, a university student dressed for an evening out, is discovered in a car that was involved in an accident investigated days before by the police. The second body, that of a London financier, is retrieved from the bottom of a ravine, dead from a broken neck, but clad in a business suit rather than hiking clothes. There is nothing that links the two deaths until Banks and his colleagues start asking questions and a third body, obviously murdered this time, turns up. Robinson fans will enjoy the latest entry (after ) in this long-running series. First-time readers will be motivated to seek out the previous titles. Well-written and believable, with recognizable but multifaceted characters and enough twists to keep the story riveting until the mystery is solved. [See Prepub Alert, 8/10/18.]

Det. Supt. Alan Banks has two unusual deaths to investigate early in bestseller Robinson's engrossing 25th outing for the Yorkshire policeman (after 2017's ). A young woman with no marks of violence on her, later identified as college student Adrienne Munro, is found in an abandoned car on a country road. Adrienne is dressed up as if for a party, but she has no cell phone or purse. Meanwhile, a male in his mid-60s, later identified as wealthy banker Laurence Hadfield, appears to have died of injuries due to a fall into a gully in the middle of a moor. Oddly, he's wearing a business suit, and, like Adrienne, has no cell phone. As Banks and his capable team go to work interviewing people who knew the deceased, they wonder what could possibly link the two. A third peculiar death provides some answers. Readers expecting a host of suspects and wild plot twists will be disappointed. Those who enjoy methodical police procedurals that build to a logical, satisfying conclusion will be amply rewarded. Agent: Dominick Abel, Dominick Abel Literary. (Mar.)

A clubbable womanHill, Reginald
Who saw him die?Gregson, J. M.

Say it with poisonGranger, Ann