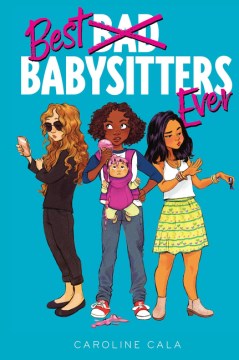 Fans of the Baby-Sitters Club books are a natural fit for this debut novel about three enterprising girls, Malia, Dot, and Bree, who decide to start a babysitting business, despite the fact that they don't particularly like children. Their motive? To earn enough money to throw a huge party. The girls' plan hits a snag, however, when Malia's sister decides to start a rival babysitting service (the Seaside Sitters) to put them out of business. Malia has always felt inferior to her sister Chelsea, so Malia is doubly frustrated when she finally finds something she is good at, only to have Chelsea steal her idea. As the story moves forward, Malia hatches a plan to stand up to her sister and reclaim her business idea. Cala incorporates themes of sibling rivalry, jealousy, competition, friendship, manipulation, entrepreneurship, and first crushes into this realistic series starter. As the pressures of running a business and rivalries mount, readers will find themselves rooting for the best babysitters ever. Try with Raina Telgemeier's graphic novel Kristy's Great Idea? (2015). Grades 5-8. Copyright 2019 Booklist Reviews.

A trio of not-particularly-capable sitters appropriates the central business model of Ann M. Martin's Baby-Sitters Club books. Much of the humor in this over-the-top send-up of lesson-laden kids' pop culture comes via the hyperbolic traits of its sometimes misguided characters. Believable friendship dynamics and motivations balance out the silliness. The source material serves as a jumping-off point, so familiarity with Martin's series isn't necessary. Copyright 2019 Horn Book Guide Reviews.

In this series opener, Malia stumbles across an old copy of Kristy's Great Idea, the first of Ann M. Martin's Baby-Sitters Club books, and appropriates the central business model. But unlike Kristy and friends, whose babysitting adventures came with an earnest wish to do right by their charges, the trio of Malia, Bree, and Dot has less interest in caring for children than in getting paid—mainly so they can impress their peers with a party like the one at a classmate's recent bat mitzvah. Nor are they particularly capable sitters…and things go from not-so-great to worse when Malia's older sister and her friends become competitors. Much of the humor in this over-the-top send-up of lesson-laden kids' pop culture comes via the hyperbolic traits of its sometimes misguided characters. But believable friendship dynamics and motivations balance out the silliness: as Dot eventually points out, Malia's obsession with proving herself has made her unreasonably dependent on the club's success. The source material's premise (babysitting + friends + "a corded telephone" = club) is clearly explained and serves as a jumping-off point, so familiarity with Martin's series isn't necessary, though it makes these characters' incredulity at its wholesomeness funnier. A breezy, entertaining read, this book and the promised sequels seem likely to fill a role similar to the original—as reading material kids choose for themselves. shoshana flax January/February 2019 p 86 Copyright 2018 Horn Book Magazine Reviews.

Finding an old copy of in a box of free books, seventh grader Malia (or "Alia," as she prefers) devises a plan to raise money for the most epic joint birthday party of all time. Enlisting the help of her two best friends—aloof, black-clad Dot and bubbly, Taylor Swift–obsessed Bree—the three launch a babysitting service, refusing to let lack of experience (or dislike of children) stand in their way. When Malia's perfect older sister schemes to steal their clients, the girls are forced to reconsider their plans, as well as their own motivations and needs. In her middle grade debut, Cala artfully uses humorous banter to paint the dissimilar friends' realistic relationships as well as their bumbling efforts to vocalize their feelings and advocate for themselves. Some scenes, as when a charge urges the babysitters to communicate, can feel inauthentic but allow worthwhile messages to shine. An appealing, humor-filled update to a classic series. Ages 10–12. (Feb.)

The Tapper twins go to war (with each other)Rodkey, Geoff, 1970-

The worst things in life are also freeBenton, Jim