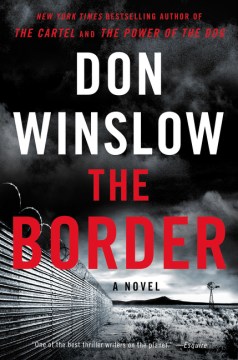 *Starred Review* The publication of the concluding volume in Winslow's epic Cartel Trilogy represents a landmark moment in crime fiction, and it couldn't come at a more propitious time—just as debate over the construction of Donald Trump's ballyhooed border wall has closed down the U.S. government. The intermingling of fact and fiction is even more omnipresent here than it was in the earlier volumes—and this time, it includes a bloviating, would-be-wall-building president under investigation for his son-in-law's ties not to Russia but to the Mexican drug cartels. Connecting the dots from fictional characters and events to real-life ones will fuel much commentary in the coming weeks, but in the end, it is Winslow's remarkable ability to translate the utter fiasco of our 50-year War on Drugs—the thousands upon thousands of lives lost in cartel-driven violence, the journalists assassinated, the addicts dead from overdoses as the heroin epidemic spreads across America—into the most wrenching of human stories, tragedy seemingly without end, that gives this novel its unparalleled power. Winslow picks up the story of Art Keller, the DEA agent who has spent 40 years of his life fighting the War on Drugs, first in The Power of the Dog (2005) and then in The Cartel? (2015), as he becomes head administrator of the DEA in 2014. His plan is to focus not only on what the cartels are doing in Mexico (killing cartel chieftain Aidan Barrera in the previous book has done nothing to stop the flow of drugs) but also on what happens on the American side of the border, especially on Wall Street, where hedge-fund operators, including the son-in-law of the soon-to-be president, make billions by laundering cartel money. Naturally, Keller makes enemies the closer his multiyear investigation draws to the White House, forcing him to worry that the skeletons in his own closet (who really killed Barrera?) will prove to be his Achilles heel. As fascinating as the details behind the power politics are, it is the parallel stories that Winslow tells alongside the D.C. plot that give the book its dimension, producing a kind of symphonic texture as we watch the cartel factions struggle to fill the vacuum left by Barrera's death and as we follow the perilous journey of two 10-year-old Guatemalans attempting to make their way to America and finding that hell takes many different shapes. There are multiple other, seamlessly integrated stories, too—about an NYPD undercover cop tracking the drugs that the hedge-funders finance; about individual addicts who use those drugs; about a former hit man for the cartels trying to forge a separate peace—but all of those stories come together in a crescendo of pain mixed with courage. Like Keller, Winslow has spent decades immersed in the drug wars, and his prodigious research and ability to combine massive amounts of detail into a structured whole show on every page of this trilogy. But coming through with equal force is his eloquence. Throw out all the endless babble we are subjected to about the border crisis and remember only this: A border is something that divides us but also unites us; there can be no real wall, just as there is no wall that divides the human soul between its best impulses and its worst. Keller knows. He's been on both sides of the border. Copyright 2019 Booklist Reviews.

Multi-award-winning Winslow wraps up a pounding trilogy begun with and with longtime war-on-drugs combatant Art Keller having managed to defeat the Sinaloa Cartel godfather at a huge personal cost. Now he faces a bunch of dangerous new drug traffickers and an incoming administration secretly linked to them. With a 250,000-copy first printing.

In bestseller Winslow's stunning conclusion to his monumental Cartel trilogy (after 2015's ), Art Keller, now the head of the DEA, has spent decades waging a relentless campaign against the Mexican drug cartels. It's now late 2012, and Adán Barrera, Keller's longtime nemesis and the leader of the Sinaloa cartel, is missing and presumed dead. Violence soon escalates as the fractured remnants of Barrera's organization struggle against a host of new players vying for control of the drug trade. The bottom has fallen out of the marijuana market, and heroin has once again become the drug of choice for a new generation of Americans hooked on opiate painkillers. When fentanyl, a lethal new synthetic opiate, hits the streets, not only are poor minority users dying but well-to-do white kids are overdosing in record numbers. Keller knows like nobody else that America's "war on drugs" has been a complete failure, and he opts for a daring new clandestine approach: instead of targeting the suppliers in Mexico, he goes after the money in the States. With clear-eyed determination and an almost Shakespearean grasp of human nature, Winslow takes readers on an unforgettable journey.

Dutch: the first of a trilogyWoods, Teri