Why I am a Hindu / Shashi Tharoor. 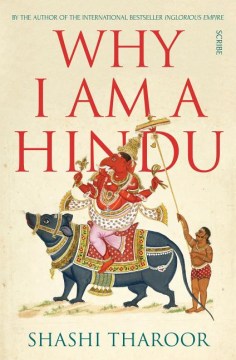 *Starred Review* Lifelong writer, longtime UN diplomat, and now an irrepressible member of the lower, popularly elected house of India's parliament, Tharoor is absolutely no stranger to controversy. Indeed, he is a big thorn in the side of the right-wing, Hindu-chauvinist BJP party of Prime Minister Narendra Modi. Not that he is hostile to Hinduism, even slightly; rather, he contends that Modi and the BJP have distorted the religion into a quasifascist nationalism powered by fearmongering about Muslims and Christians. The Hinduism Tharoor proudly asserts and defends is universalist, liberal, and syncretic, and its tradition extends from—at the latest—Adi Shankara (788–820), the peripatetic philosopher-theologian who consolidated Advaita Vedanta, which maintains the identity of the soul, Atman, and ultimate reality, Brahman; famous modern expositors are Swami Vivekananda and Mahatma Gandhi. After telling what "his" Hinduism is about and its history in the first part of the book, Tharoor turns to the twentieth-century ideology, Hindutvan ("Hinduness"), that the BJP espouses and the long train of abuses, including property destruction and murder, that its followers have committed and its leaders have winked at. With the BJP in power, Indian democracy is in dire peril, Tharoor believes. He never sounds hysterical, and except that a glossary would have just about perfected it, this deeply informative book is a must-read for Americans interested in Hinduism and the world's largest democracy. Copyright 2018 Booklist Reviews.

Tharoor, an Indian writer and member of parliament in the Indian National Congress, embraces his dual role to offer a personal account of his relationship to Hinduism and a trenchant critique of recent Hindu nationalism. The first part of the book is an explication of Hindu theology and the author's reasons for faith; the second part offers a history and criticism of 20th-century Hindu nationalism. The personal testimony shared in the first half is engrossing as Tharoor nimbly pulls together an overview of key Hindu texts, emphasizing that their heterogeneity is a strength and providing a long bibliography for further reading. His expressions of devotion are also refreshingly genuine, and accessible even to a reader with little knowledge of Hinduism. The second half, however, is less likely to appeal to an audience outside India; while its criticisms are sound, the level of detail makes it tedious reading for readers with no or little interest in Indian politics. With meticulous explanations of his positions in support of pluralism and against "Hindutva" (politicized Hinduism), the tone reads like the campaigning of an opposition politician—which, in fact, Tharoor is. Although general readers will find much here hard to parse, those interested in Indian politics will get a thorough account of Tharoor's beliefs and the politics of the Indian National Congress.

The battle for GodArmstrong, Karen, 1944-

The good book: a humanist BibleGrayling, A. C.

Being Hindu: understanding a peaceful path in a violent worldSengupta, Hindol

Why I am a SalafiKnight, Michael Muhammad

God of love: a guide to the heart of Judaism, Christianity, and IslamStarr, Mirabai

The Bhagavad Gita: the song of God retold in simplified EnglishViljoen, Edward

The Faith Club: a Muslim, a Christian, a Jew-- three women search for understandingIdliby, Ranya, 1965-

The Islamic Jesus: how the king of the Jews became a prophet of the MuslimsAkyol, Mustafa, 1972-