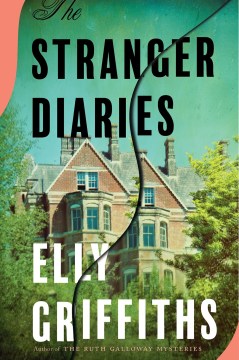 *Starred Review* In a departure from her acclaimed Ruth Galloway and Magic Men mystery series, Griffiths has gifted readers with a gripping homage to the gothic novel. Clare Cassidy teaches a course on the fictional eighteenth-century writer R. M. Holland, author of the grim but beloved story, "The Stranger." Her colleague and good friend is murdered and a line from the story is left by the body. Someone has begun writing in her diary, starting off with an ominous "Hallo Clare. You don't know me." Wilkie Collins' The Woman in White opens "This is the story of what a Woman's patience can endure." Like Collins, who wove his tale with multiple voices, Griffiths uses three different narrators here, none of whom is entirely reliable. This is an entrancing literary tour de force in which Shakespeare's line, "Hell is empty," from The Tempest, cleverly connects past and present. Georgette Heyer fans will relish this, as will readers who enjoyed Diane Setterfield's The Thirteenth Tale (2006) and Anthony Horowitz's Magpie Murders (2017). Copyright 2018 Booklist Reviews.

High school English teacher Clare Cassidy is understandably upset when a good friend and colleague is found dead but truly undone to learn that a line from "The Stranger," a celebrated story by her beloved Gothic writer R.M. Holland, has been left with the body. To steady herself, she starts keeping a diary, only to find someone else's handwriting amid her words, offering the threatening observation, "Hallo Clare. You don't know me." Sounds like Griffiths is out to show why she's a CWA Dagger in the Library Award winner.

High school English teacher Clare Cassidy specializes in the work of gothic writer R.M. Holland. When one of her colleagues is murdered, a line from Holland's most famous work, , is found on her body, and the police are certain the killer is someone Clare knows. As she struggles to make sense of the events surrounding the murder, Clare pours out her heart into her diary, but when she visits an earlier volume to check on the date of a work trip, she's shocked to find a note in unfamiliar handwriting in the margins: "Hallo, Clare. You don't know me." Unsure whether she has a stalker, a ghost, or suffered a break from reality, Clare struggles to keep it together for her teenage daughter—until the next murder. Griffiths's ("Ruth Galloway" and "Magic Men" series) first stand-alone novel is a modern gothic that updates and plays with genre conventions to great effect. Highly recommended for fans of British mysteries and classic whodunits. [See Prepub Alert, 9/10/18.]

In the wake of a divorce, Clare Cassidy, the heroine of this gripping standalone from Mary Higgins Clark Award winner Griffiths (the Ruth Galloway mysteries), accepts a job teaching English at Talgarth High, whose West Sussex campus includes the home of Victorian writer R.M. Holland, best known for his chilling story "The Stranger." Five years later, Clare and her 15-year-old daughter, Georgia, have settled into local life, and Clare has started work on a Holland biography. Then colleagues begin dying in violent ways reminiscent of "The Stranger," and Clare discovers mysterious notes written in her personal diaries. Alternating among the voices of Clare, Georgia, and Det. Sgt. Harbinder Kaur, who investigates the killings, Griffiths weaves a tale replete with ghosts, the occult, forbidden desire, and murder. Excerpts from "The Stranger" build the eerie atmosphere, though the tale's denouement and the killer's identity may disappoint some readers. Still, aficionados of such gothic classics as Wilkie Collins's , which the killer may have read, will find this a satisfying novel for a rainy night.

Woman with a gunMargolin, Phillip

A place of executionMcDermid, Val

Death of a busybodyBellairs, George