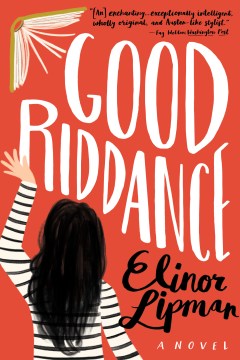 Clutching the copy of the 1968 Pickering High School yearbook her late mother bequeathed her to her chest and finding that it did not give her joy, Daphne followed the latest decluttering lifestyle advice and tossed it into her building's recycling bin, heartfelt student dedications and her mother's cryptic notes about members of the senior class notwithstanding. When Daphne's nosy neighbor, ersatz filmmaker Geneva, rescues it with plans to create a documentary around the yearbook's murky origins and codes, Daphne's sense of remorse kicks in. An epic struggle for ownership ensues, one that will find Daphne and Geneva unlikely attendees at the Class of '68's fiftieth-anniversary reunion, where one former student presents Daphne with life-altering news. The question of who gets to tell one's own story lies at the heart of Lipman's (On Turpentine Lane, 2017) smart, sassy, and satisfying rom-com. Luckily for fans of contemporary women's fiction, the answer is Lipman as she once again delivers a tightly woven, lightly rendered, but insightfully important novel of the pitfalls to be avoided and embraced on one's path to self-discovery. Copyright 2018 Booklist Reviews.

Stuck for space, Daphne Maritch ditches a high school yearbook dedicated to her mother by the class of 1969, which her mother annotated reunion after reunion with sometimes acidulous comments about who's been behaving badly. But it's found in the trash by a nosy neighbor—who happens to be a documentary filmmaker. With a 45,000-copy first printing.

Daphne Maritch's mother, June, recently passed away, and specifically left Daphne a heavily annotated yearbook. It's not June's own yearbook, though. It's a yearbook from the class of 1968 of Pickering High School. June was a brand-new, devoted young English teacher and yearbook advisor. Daphne vividly remembers June's lifelong dedication to the class; she attended each reunion. June's observations about class members aren't always kind, and Daphne can't understand why her mother clung to such a memento. On moving to New York City and cleaning her apartment, Daphne pitches the book into the recycling, only to have it rescued by her neighbor Geneva, an aspiring documentary filmmaker. Geneva sees untold amounts of drama in the find, perfect for a film. Before Daphne can wrest the yearbook back from her, Geneva sweeps Daphne home to Pickering for the next Class of '68 reunion and into far more entanglements than Daphne could possibly have imagined. Fans of Lipman will cheer for a new novel in her signature style: funny, warm, sharp, smart, and full of love for family, no matter how flawed. [See Prepub Alert, 8/27/18.]

Lipman's satisfying latest is a worthy addition to her long lineup of smart, witty novels. When Daphne Maritch throws away the marked-up yearbook her late mother (the advisor to whom it was dedicated) left her, she unleashes a series of events that will change her life forever. After leaving the yearbook in her New York City apartment building's recycling bin, Daphne's eccentric and annoying neighbor Geneva Wisenkorn, a self-proclaimed filmmaker, nabs it, weirdly intent on transforming it into a documentary. When the two attend the class of '68's reunion in her hometown of Pickering, N.H., Daphne learns a long-held family secret: one of her mother's former students, Peter Armstrong, is her biological father. To complicate matters, Daphne's father, Tom—a retired high school principal—has just moved to New York, begins working as a dog walker, and meets a charming Manhattanite who might just end up being Daphne's stepmother. And he's not giving his daughter up easily. In a lesser writer's hands, the plot could have devolved into a soapy mess, but Lipman ably turns it into a charming romantic comedy. Lipman () complements Daphne, Tom, and Geneva with a stellar cast of supporting characters (especially Jeremy, the sexy actor across the hall) and intelligent and lyrical prose, making this novel a delightful treat readers will want to savor.

The bookshop of yesterdaysMeyerson, Amy

A week at the shoreDelinsky, Barbara
Now that you mention itHiggins, Kristan

The geometry of sistersRice, Luanne