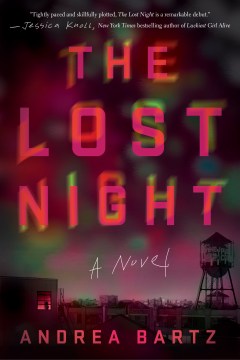 *Starred Review* Edie Iredale, sure of her beauty and never lacking for lovers, stood out from her crowd of recent college graduates in 2009 Manhattan. And then on the long, boozy night of August 21, she was dead, shot in her own apartment in a presumed suicide. Ten years later, Edie's once-best-friend, Lindsay Bach, tries to re-create that night and her part in it, which is lost in an alcoholic haze. In her first-person narrative, interrupted by short accounts from three men in Edie's life, Lindsay confronts her past and the violence she displayed even as a teenager, which was exacerbated when she drank, as she did to the point of blacking out on that fateful night. Probing the memories of close friends who shared an apartment with Edie, Lindsay learns that she's not alone in questioning the ruling of suicide. Despite recent physical and financial setbacks, Edie had displayed a fierce will to live. And if it was murder, did Lindsay have a role in it? Bartz calls upon psychology and technology as Lindsay, whose profession is research and fact-checking, uncovers the truth. A riveting debut with, yes, an echo of The Girl on the Train. Copyright 2018 Booklist Reviews.

DEBUT Lindsay is happy with her life in New York City. She's head fact-checker at a magazine, rents her own apartment, and has friends she can call on for anything. An event that happened a decade ago is long behind her, or so she thinks, until Sarah, a friend from her past, arrives and brings up that fateful night in 2009. Dredging up their drug- and alcohol-riddled past and the night that best friend Edie committed suicide is more than Lindsay bargained for. As her detail-oriented mind goes into overdrive after the conversation with Sarah, she rethinks all she thought she knew about the night Edie died, exploring the gaps in her own memory and playing detective even as others get involved. Debut author Bartz pens a captivating psychological suspense novel full of moving pieces and is expertly paced. The tension is unmatched as the pieces fall into place, but not without the protagonist second-guessing herself. This whip-smart and mysterious read is perfect for fans of Gillian Flynn and Paula Hawkins.

It's 2009, at the height of the recession, and Lindsay Bach, the narrator of Bartz's accomplished debut, and her friends hang out in the hipster haven of the Calhoun Lofts in Bushwick, Brooklyn, living in a haze of concerts, alcohol, and drugs. Late one August night, Edie Iredale, the attention-seeking leader of the group and Lindsay's best friend, is found dead with a gun in her right hand and a short suicide note open on her computer. Ten years later, Lindsay accepts Edie's suicide as a devastating part of her past, but when she reconnects with some of her old friends, she discovers that her memory of that fatal night is mysteriously missing. Lindsay begins calling everyone who was at Calhoun that night, digging through old email chains, stalking Facebook accounts, and watching camcorder videos, but what she finds doesn't bode well for her. As the story hurtles toward its dramatic conclusion, Lindsay realizes she can't trust anyone, especially not herself. Fans of psychological thrillers will want to see more from this talented newcomer.