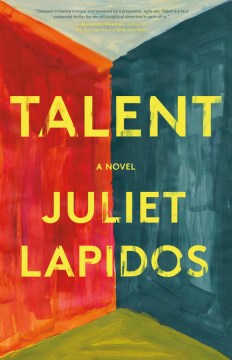 Anna, a seventh-year graduate student studying English, can't seem to finish her dissertation: an intellectual history of inspiration. Instead, she spends her days utterly uninspired, eating Pop-Tarts and leaving her apartment only to meet with her advisor or shop for groceries. By sheer happenstance, she meets Helen, the niece of legendary author Freddy Langley, who wrote three incredibly successful novels in his youth and remained uninspired for the rest of his life. Helen gives Anna private information about her uncle's latter years, and his journey as a writer gives Anna the perfect case study for her thesis. Unveiling more about Freddy through his exclusive notebooks becomes Anna's primary focus—and her inspiration—but it soon becomes an obsession that ultimately leads her to criminal intrigue. Los Angeles Times editor Lapidos' literary prowess is evident in this brilliantly witty and humorous debut. The novel's layers explore the dangers of interpretation and the varying perceptions of one's, and others', intentions, all of which come together to make a thoroughly enjoyable read. Copyright 2018 Booklist Reviews.

DEBUT Anna Brisker, a 29-year-old grad student at a prestigious Connecticut university, has only to complete her dissertation to earn her PhD, but her adviser thinks her work "too thin" and urges her to find a case study to illustrate her argument. Then she meets Helen, niece of author Frederick Langley, who wrote three popular books as a young man and then stopped writing altogether. He seems like the perfect subject, but there doesn't appear to be any substantive research material available. Helen, however, reveals that the university's rare books library has two unpublished notebooks that belonged to Langley and plays on her sympathies by claiming that she really owns the journals but can't afford to fight the university in court. She also claims that Langley never wanted the contents of the notebooks to become public. What should Anna believe, and what should she do? Lapidos has created a funny, ironic, and witty first novel whose main character is a parody of every graduate student ever. Alternating between Anna and the contents of the Langley notebooks, the multilayered stories keep readers guessing, appealing to general fiction readers, especially those with any background in academia.

In her snappy debut, Lapidos questions cultural obsessions with productivity and maximized potential that date back to Jesus's parable of the talents. A graduate student at Collegiate University (a thinly veiled Yale) and on the cusp of 30, Anna struggles to complete her languishing dissertation on artistic inspiration, already looking ahead to "the life of a professor emerita" before her career has even begun. A chance encounter with Helen Langley at the grocery store puts her in "physical proximity to genetic proximity to fame": Helen is the niece of Frederick Langley, a deceased author of some renown who stopped writing after a promising early career. Helen is involved in a legal battle with Collegiate over its possession of Langley's unpublished notebooks, which the idling graduate student hopes to mine for material to kick-start her dissertation. The novel proceeds briskly as Anna delves into Frederick's papers to explain his premature retirement and as the impoverished Helen angles to secure the valuable manuscripts. Anna's voice is sharp and humorous, capturing the jaded graduate student's mix of posturing, snark, and self-loathing, but Frederick isn't as enigmatic as he's intended to be, and his scheming niece Helen is insufficiently drawn, which weakens the pull of the literary mystery. However, the novel is redeemed by its intelligent musings on the responsibilities of literary culture: what do talented authors owe their readers and themselves? (Jan.)

Today will be differentSemple, Maria

How I became a famous novelistHely, Steve