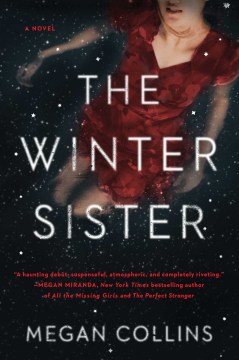 Collins' dark, tense, and completely absorbing debut opens with the disappearance of Persephone O'Leary, who snuck out of her house to meet her boyfriend, Ben, but never returned. Three days later, her body is found under a foot of snow, but the discovery is only the beginning of the story. Persephone's sister, Sylvie, carries a secret guilt with her for years afterwards but avoids facing it until she returns to her hometown to care for her mother, who is fighting cancer. Determined to find out who murdered her sister, Sylvie starts with the person she has blamed for years: Ben. But he is not the person she remembers, and so she begins to question everything she thought she knew about her family. While full of hand-clenching suspense, the novel's real strength comes from its study of relationships. Why had Sylvie's mother been so against Persephone seeing Ben? Why couldn't Sylvie and her mother maintain their close relationship? Gripping to the last page, it's the desperation in the connections among these characters that will stay with readers. Copyright 2019 Booklist Reviews.

Recently laid off from her job as a tattoo artist in Providence, R.I., 30-year-old Sylvie O'Leary, the narrator of Collins's tepid debut, has no excuses to not return home to Spring Hill, Conn., when her aunt calls with the news that her alcoholic mother, Annie, has cancer. Mother and daughter have been estranged since the murder of Sylvie's 18-year-old sister, Persephone, 16 years earlier. The case remains unsolved. The most likely suspect, Persephone's boyfriend, Ben Emory, the son of the town's mayor, was quickly cleared by police after a brief investigation. Coincidentally, Annie is being treated at the cancer center where Ben works as an oncology nurse. The three people who loved Persephone the most—Sylvie, Annie, and Ben—confront themselves and each other as the truth slowly unravels, revealing the part each played in the events that led to Persephone's murder one cold winter night. This psychological thriller starts strong, but the story veers off along tired plot lines, leaving readers as adrift as the characters.