The twice-born : life and death on the Ganges / Aatish Taseer. 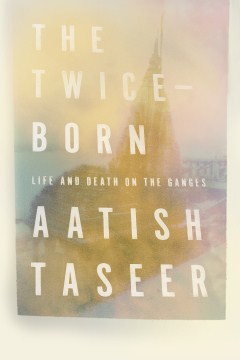 A wish to learn Sanskrit and study the twice-born, the Brahmins at the highest perch of the Hindu pecking order, inspired Taseer (The Way Things Were, 2016) to visit the ancient Indian city of Benares (official name: Varanasi) on the banks of the holy Ganges River. A gay man and the son of a Muslim Pakistani politician and an illustrious Sikh Indian author, Taseer calls New York City home. By being familiar with Benares while also being a spectator on the sidelines, he proves to be adept at chronicling the city's various fractured selves. Although the book's nebulous goals (is it about Brahmins, the first Modi election, the clash between modernity and tradition, or all of the above?) threaten to muddy the narrative, the city nevertheless takes shape through profiles of Brahmins who share their views of the cultural and political landscape. Benares is especially sacred to Hindus as a place to make peace with death. Curiously, it is this aspect of the city that really comes to life in this meandering but engaging account. Copyright 2019 Booklist Reviews.

A multi-award-nominated novelist, Taseer () first saw Benares, one of Hinduism's holiest sites, as the Westward-looking 18-year-old son of an Indian journalist and a Pakistani politician raised in New Delhi. Twenty years later, he left Manhattan to study the Brahmins, Hinduism's highest caste, devoted to sacred learning, but instead found an India torn between rapid modernization and ferocious, anti-Muslim nationalism.

Hindus' struggle to reconcile modern life with age-old traditions is at the heart of this ruminative study of India's identity crisis. Indian novelist and journalist Taseer () visited the holy city of Benares on the Ganges River to meet members of the priestly Brahmin caste who study ancient Sanskrit literature. These "twice-born" students and professors embody, as Taseer sees it, India's cultural contradictions, as they are devoted to Hindu spirituality, but are aware of its distance from the scientific, materialistic Western worldview that India must pursue to achieve progress and economic development. Resentful and uncertain, they savor stories of magic and miracles, gravitate to Hindu nationalist politics, and cling to the caste prejudices that give them social prestige. Taseer probes his own deracination—he's gay, agnostic, and the illegitimate son of an Indian woman, details that he doesn't discuss with his Brahmin subjects—as part of a Westernized, English-speaking, subcontinental elite that's increasingly isolated and precarious. (He stoically recounts the assassination of his father, a liberal Pakistani politician, by a Muslim fundamentalist in 2011.) Taseer sets these meditations against a gorgeous, sinister portrait of Benares—"the river was flat and oily; beggars circled... there was a darkling energy abroad in the city"—with its religious fervor, funeral pyres, and floating corpses. The lengthy conversations about Hindu philosophy sometimes drag, but Taseer's wonderfully atmospheric rendition of landscapes and gnarled social psychologies make for an engrossing dissection of India's discontents.

In the valley of mist: Kashmir : one family in a changing worldHardy, Justine

Gandhi: the years that changed the world: 1914-1948Guha, Ramachandra

The Islamic enlightenment: the struggle between faith and reason, 1798 to modern timesDe Bellaigue, Christopher, 1971-

First darling of the morning: selected memories of an Indian childhoodUmrigar, Thrity N.

The heart is a shifting sea: love and marriage in MumbaiFlock, Elizabeth

Indian summer: the secret history of the end of an empireVon Tunzelmann, Alex, 1977-

Ants among elephants: an untouchable family and the making of modern IndiaGidla, Sujatha, 1963-