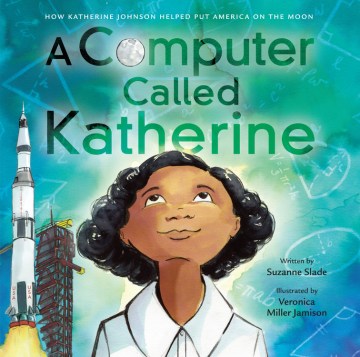 Math came easy to Katherine Johnson while she was growing up. In the 1950s, when she was in her 30s, she was hired at NASA as a "computer" (a female mathematician who assisted the male engineers) and eventually worked her way up to the Apollo 11 project. Vignettes of Katherine's work—familiar to aficionados of the 2016 film Hidden Figures—depict her talent with calculations, the drama of early space travel, and the way both combined to put humans on the moon. There are a few missed opportunities—just how groundbreaking Katherine's work was for the time, given her gender and race, isn't fully conveyed. Still, Slade, herself a rocket engineer, cleverly integrates topical concepts within the text, and the strong back matter includes a time line and source notes. For younger readers, the racist arguments Katherine's African American family faces are depicted as being "as wrong as 5 + 5 = 12." Wide pages offer appropriate room for the engaging mixed-media illustrations (don't miss the endpapers!), which wonderfully introduce, depict, and honor this STEM heroine. Grades 1-3. Copyright 2019 Booklist Reviews.

Math genius Katherine Johnson (née Coleman) was a star student, twice skipping a grade before her family moved 120 miles for her to attend—at age ten—a high school that allowed African American students to enroll. After graduating from West Virginia State College—at age eighteen—she became a math teacher. In 1953, Katherine started work as a "computer," or mathematician, for Langley Aeronautical Laboratory in Virginia (part of what would become NASA). Her lightning-fast problem-solving skills and keen questions soon landed her a spot on the space team. She showed up—on purpose—for the team's men-only meeting and wowed them with her geometry expertise. During her career, Johnson calculated Alan Shepard's First-American-in-Space flight path; verified, at John Glenn's request, Glenn's First-American-to-Orbit-Earth trajectory; and planned, double-checked, and approved Apollo 11's Race-to-the-Moon-and-Back flight path. Inspiring, upbeat, and clever, Slade's text deliberately includes incorrect equations, printed in red ink, to cleverly highlight the racism, sexism, and other false beliefs that Johnson confronted. "Back then, people said women could only be teachers or nurses. Katherine knew that was wrong—as wrong as 10 – 5 = 3." Equations, along with angles and diagrams, also fill Jamison's expressive, layered illustrations. The 2016 book and movie Hidden Figures put Johnson in the spotlight; to help keep her there—?and inspire future mathematicians—?share this and Helaine Becker's Counting on Katherine with the picture-book-biography crowd. Images from Johnson's work, a timeline, author and illustrator notes, and a list of sources are appended. tanya d. auger July/Aug p.149 Copyright 2019 Horn Book Magazine Reviews.

Slade explores the life of NASA mathematician Katherine Johnson. Johnson excelled in mathematics beginning in childhood but was frustrated by the lack of opportunities available to women of her era. Her perseverance and skills led her to work at a Virginia research center, where she made complex calculations, advocated for her right to attend meetings with male engineers, and eventually joined the NASA space team. Slade writes in clear, up-tempo prose, well paired with Jamison's expressive mixed-media art, which presents Johnson as a self-assured figure in bright, jewel-toned clothing. Spreads also feature chalky mathematical computations, and the launch of —guided by Johnson's meticulous calculations—is presented dynamically across three panels. An uplifting portrait of a no longer so "hidden" figure. Ages 4–8. (Mar.)