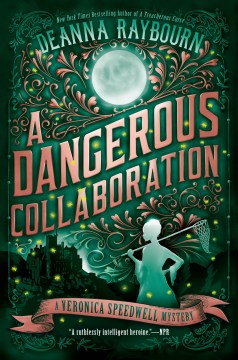 *Starred Review* As anyone familiar with Veronica Speedwell knows, the spirited lepidopterologist only indulges in romantic dalliances when she travels—and only with non-Englishmen. But lately, the sexual tension between Veronica and her colleague, Stoker, has become too much! To escape it, Veronica flees. When she returns six months later, she still finds Stoker irresistible, so she flees again—this time at the invitation of Stoker's brother. In exchange for a rare specimen of butterfly, she agrees to pose as his fiancée when he visits an old friend, Malcolm Romilly. Stoker, uninvited, joins, and when they arrive, they realize Malcolm Romilly's mansion is haunted by the three-year mystery of his bride, who went missing on their wedding night. Did she commit suicide? Is she in hiding? Was she murdered? Veronica decides to find out, exploring the mansion's most intriguing secrets—hidden passageways, a poison garden, a salaciously illustrated harpsichord. Raybourn's latest mystery is as lively and adventurous as the previous installment (A Treacherous Curse, 2018). Although Veronica's clever, scientific instincts continue to help her decipher clues and read people's motivations, she is more introspective as she sorts out her own feelings, adding vulnerability to an already dynamic heroine. Positively excellent, or—as Veronica would say—"Excelsior!" Copyright 2019 Booklist Reviews.

Posing as the fiancée of colleague Stoker's brother, who wants someone familiar by his side at Lord Malcolm Romilly's house party, Victorian adventuress Veronica Speedwell lands on an island off Cornwall. Sounds glam, but the party guests are all connected to Romilly's wife, Rosamund, who vanished on their wedding day, and things soon get spooky. Fourth in a series after ; Raybourn also does the best-selling Lady Julia Grey series.

In the fourth entry of this historical mystery series (after ), Victorian-era sleuth Veronica Speedwell and Tiberius, the brother of Veronica's colleague Stoker, head to a weekend house party on a remote island off the coast of Cornwall. Tiberius bribes her with the promise of a rare butterfly to add to her collection and suggests they pose as an engaged couple, to preserve her reputation. Temporarily on the outs with Stoker, Veronica agrees to the scheme, but naturally Stoker shows up. Turns out they are all really there to investigate the disappearance of their host's wife, who vanished three years earlier on her wedding day. Did Rosamund run away or was she murdered? Tiberius, who had secretly been in love with her, needs to know what happened. Veronica fearlessly dives in, as usual ignoring all the warning signs. As there's little substance to the mystery, readers can concentrate on the slowly developing relationship between the fiercely independent Veronica and Stoker, who is still reeling from his wife's betrayal. Those new to the series should read the books in order. [See Prepub Alert, 9/10/18.]

In March 1888, Veronica Speedwell agrees to accompany Tiberius, Viscount Templeton-Vane, to a windswept Cornish isle, the home of a rare butterfly, in Raybourn's deliciously gothic fourth mystery featuring the adventurous lepidopterist (after 2018's ). Incidentally, Veronica hopes to sort out her disturbing feelings for Tiberius's brother, Revelstoke "Stoker" Templeton-Vane—a plan that's complicated when Stoker invites himself along. St. Maddern's Isle is owned by Tiberius's oldest friend, Malcolm Romilly, whose bride, Rosamund, disappeared three years earlier, on their wedding day. In order to finally discover what has become of Rosamund, Malcolm has gathered everyone who was present on the day she went missing: his estranged family, his long-time staff, and Tiberius, who harbored a secret passion for the mysterious Rosamund. Over several stormy days, Veronica and Stoker discover that everyone is concealing painful secrets and ulterior motives. A brooding castle, rain-lashed windows, hidden passages, and a séance all contribute to a delightfully creepy tale with twists that would make Daphne Du Maurier proud. Agent: Pam Hopkins, Hopkins Literary Assoc. (Mar.)

The Lady Travelers Guide to scoundrels and other gentlemen:Alexander, Victoria

A lady's guide to etiquette and murderFreeman, Dianne