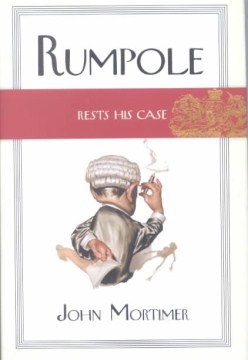 The seven delectable short stories in this collection feature one of the best-loved characters in British crime fiction, barrister Horace Rumpole. The cranky, crusty, delightfully droll Rumpole, despite his wiliness before the bar at the Old Bailey, London's main criminal court, defers in all domestic matters to his wife, whom he calls "She Who Must Be Obeyed." Nevertheless, here he navigates his imperturbable way through such legal situations as "Rumpole and the Old Familiar Faces," in which, during one Christmas season, he has the odd experience of recognizing two individuals from two previous cases, which leads him to solve the two cases he has at hand; and "Rumpole and the Actor Laddie," in which Rumpole's client, a too-long-in-the-tooth actor, takes the stand to testify at his own robbery trial, untruthfully admitting to the crime in order to give one last, fine public performance. With Mortimer's greatly felicitous style and careful plotting, these stories are sheer, absolute reading pleasure. At one point in one story, She Who Must Be Obeyed snaps at Rumpole, "You're not nearly so funny as you think you are." Oh, but indeed he is! ((Reviewed October 15, 2002)) Copyright 2002 Booklist Reviews

Mortimer's many fans on both sides of the Atlantic will delight in Horace Rumpole's return after a six-year hiatus in this amusing collection of the gruff but lovable barrister's latest exploits. The familiar cheroot-puffing, claret-quaffing denizen of Old Bailey now faces the challenges of a new millennium-including illegal aliens, drug-dealing and fraudulent e-mails-as he defends a series of peculiar clients. In "Rumpole and the Old Familiar Faces," Horace laments his reunion with a former blackmailer, now turned lord of the manor, whom Horace persuades to donate ill-gotten gains for the restoration of a church steeple. "Rumpole and the Asylum Seekers" has the barrister teamed up with an Afghan doctor who smuggled himself to England in a crate of chutney and now faces prison and torture if he is sent home. In the case of "Rumpole and the Camberwell Carrot," he rescues the career of a controversial politician branded with drug-use allegations by a seductive tabloid reporter. Next, in "Rumpole and the Teenage Werewolf," he comes to the aid of an alleged stalker whose e-mail address has somehow been usurped to harass a young coed. A courtroom collapse almost finishes his career in the title story, when wife Hilda ("She Who Must Be Obeyed") tries to keep him around their Froxbury Mansion flat ("decidedly not a mansion," regrets Horace) to help with the shopping. Using fade-ins for quick scene changes reminiscent of the popular PBS series Rumpole of the Bailey, Mortimer proves his wit is as sharp as ever; he and his hero deserve a hearty welcome back. (Nov. 25) Copyright 2002 Cahners Business Information.

Leader of the packRosenfelt, David

Defender of the innocent: the casebook of Martin EhrengrafBlock, Lawrence