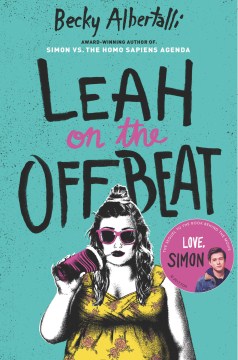 *Starred Review* Leah Burke takes center stage in this sequel to Albertalli's Morris Award–winning Simon vs. the Homo Sapiens Agenda (2015). It's senior year, and Leah's friends can't stop talking about college, prom, and long-distance relationships. Simon and Bram are as cute as ever, Leah's got college lined up, and goofy Garrett obviously has a crush on her. But Leah can't quite get into it. She feels like a third wheel (even at home, now that her mom is dating someone new); she doesn't really care about prom; and when her friend and bandmate says something racist, Leah's content to just break up the band and get on with her life. Plus, she's nursing a wicked crush on her friend Abby, and she's worried that if she does anything about it, she'll blow up their whole friend group—let alone the fact that no one knows she's bi. Albertalli has a fantastic ear for voice, and it's beautifully on display in Leah's funny, wry, and vulnerable first-person narrative. She gets to the core of Leah's hang-ups about money, her body, her place among her friends, her reluctance to let anyone get too close, and her perfectionism without a trace of heavy-handedness, and she leavens the poignant emotional growth with snarky teen banter, hilarious mishaps, and swoonworthy (but never saccharine) romance. Everything Albertalli already did so well in Simon, she's improved upon here, and fans of the first book will be utterly smitten with Leah. HIGH-DEMAND BACKSTORY: Perhaps you've heard of a little movie called Love, Simon? Your patrons certainly have. You'll probably want extra copies of this. Grades 9-12. Copyright 2018 Booklist Reviews.

Leah, Simon's friend from Simon vs. the Homo Sapiens Agenda, stars in a story of their friend group's last few months of high school. Leah, who hasn't told others she's bisexual, slowly falls for her once-estranged friend Abby but worries about a variety of repercussions. Frequently funny, this novel is also socially aware, addressing issues of race, class, and body image in addition to sexuality. Copyright 2019 Horn Book Guide Reviews.

The summer of usVinesse, Cecilia

The summer of Jordi Perez and the best burger in Los AngelesSpalding, Amy

You know me wellLaCour, Nina