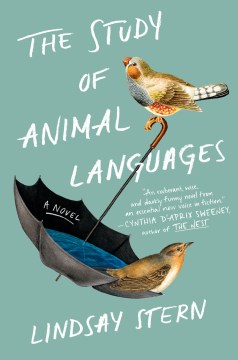 Stern's jittery, intelligent first novel takes place over a few fraught days during which a marriage that's already in trouble gets pushed to its breaking point. Depressed narrator Ivan is a 47-year-old philosophy professor on the slow track who has just earned tenure at the unnamed Rhode Island college at which he and his wife both teach. He's been married for six years to sparkling Prue, seven years his junior and a student of animal languages with some provocative ideas. She's on the brink of showy academic success, and she appears to be getting bored with staid Ivan. Their tenuous situation is threatened by the arrival of Prue's unbalanced father, Frank; Prue's delivery of a key speech that offends key faculty members; and a trip to the local aquarium that goes horribly wrong. Stern shows wry insight into the peculiar problems of academia, and the many discussions of communication, animal and human alike, add depth to her depictions of relationships in which the parties involved experience a distressing inability to communicate. Copyright 2018 Booklist Reviews.

DEBUT Things aren't going well for Ivan Link and his wife, Prue, who teach at a Rhode Island university. Ivan is an uptight philosophy professor whose obsession with logic almost rivals that of 's Mr. Spock. Young and vivacious, Prue is gaining acclaim for her research in biolinguistics, the study of the biology and evolution of language, and her career is beginning to eclipse Ivan's. To complicate matters, Prue's unstable father, Frank, comes to visit, and he's not taking his prescribed meds. When Prue gives a lecture proposing that the birds she studies might actually have their own language, it sets off a wave of controversy, and Frank is turning into a noisy animal-rights activist who soon gets into trouble, too. Meanwhile, Ivan's worry that Prue is interested in a visiting professor triggers his own midlife crisis. Can this marriage be saved? Offering sympathetic characters and wry, rueful humor, debut novelist Stern proves to be an astute observer of both university politics and human behavior in an engaging debut that certainly raises thought-provoking questions while seldom becoming pedantic or ponderous. [See Prepub Alert, 8/16/18.]

Stern's latest (after ) is a taut, brainy tale that tracks the breakdown of an academic couple's marriage while dissecting differences between language and communication, knowledge and truth, madness and inspiration. Forty-six-year-old philosophy professor Ivan Link drives his wife Prue's father, Frank, from Vermont to the Rhode Island college where Ivan and Prue teach to attend Prue's public lecture on birdsong. Bi-polar Frank is not taking his medication, but it is Prue who unsettles her audience by accusing animal language researchers of anthropocentrism, going so far as to call herself prison warden for the birds in her experiments. At the after-lecture party, Frank tries to force guests to admit animals have feelings by threatening to stab Ivan's cockatiel with a fountain pen. The next day, at the aquarium, believing he understands what sharks are communicating, Frank destroys the shark tank. Frank is hospitalized; Ivan and Prue quarrel. Epistemologist Ivan mistakenly assumes Prue is having an affair with a visiting novelist; biolinguist Prue, meanwhile, cannot articulate the depth of her discontent. Stern's intellectually teeming prose makes for a thought-provoking novel, though it's more successful asking questions such as, "Can voles experience heartbreak?" than depicting people breaking each other's hearts. (Feb.)