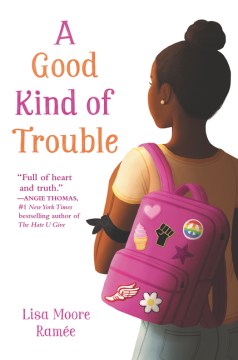 In her first novel, Ramée explores the concept that fear can stop you from doing the right thing. Shayla is a shy, bright middle-school student who deals with unwanted advances from boys, racial tensions, academic competition, and finding her own voice. Middle school is quite an adjustment for Shayla and her friends, a diverse trio dubbed "the United Nations," but she decides to stand up for the rights of African Americans after a ruling is made in a controversial court case involving the shooting of a black man by a white police officer. Encouraged by her sister and peers, she joins the Black Lives Matter movement and passes out black armbands at school, an act that puts her at odds with her friends, principal, and students of different races. As civil unrest spreads, Shayla must determine whether creating awareness by causing trouble is worth risking her academic standing. This is a solid story for middle-schoolers dealing with issues such as friendship across racial lines, being strong girls, #BLM, #MeToo, civil rights, diversity, and justice. Grades 5-8. Copyright 2018 Booklist Reviews.

Shayla's goals for her first year of junior high are simple. Attract the attention of the cute guy. Avoid the class bully. Don't make waves. Stay close to her two best friends, Isabella and Julia (with Isabella being Puerto Rican, Julia Japanese American, and Shayla African American, they call themselves "the United Nations"). Unfortunately, it would seem that seventh grade has other plans for Shayla, and soon a schoolwide "dare" game and new social dynamics throw all of her relationships into turmoil. Even as she laments the drama that comes with crushes and miscommunication, Shayla becomes increasingly aware of the Black Lives Matter movement as her Los Angeles community awaits the verdict in a police-shooting case. When the police officer is acquitted, Shayla must decide if she's willing to stir up trouble for a cause she believes in. Shayla's first-person account is honest and relatable as she tries to do the right thing by her peers, her school community, and herself. The protagonist's emotional and civic maturation is believably portrayed, and as her understanding of the Black Lives Matter movement clarifies and deepens, so does the reader's. (While themes of homophobia, cultural appropriation, and sexual harassment are also introduced, they're not as fully explored.) Ramée's debut novel presents a nuanced view of race, self-discovery, and social justice. eboni njoku March/April 2019 p 88 Copyright 2019 Horn Book Magazine Reviews.

Twelve-year-old Shay's palms itch when she senses trouble coming, and this year, they seem to be itching more than ever. She and her elementary school besties had dubbed themselves "the United Nations"—Isabella is Puerto Rican, Julia is Japanese-American, and Shay is African-American—but everyone begins moving in different directions as junior high begins. Julia is hanging out more with the Asian girls from her basketball team, and Isabella attracts Shay's crush when she gets her braces off, leaving Shay jealous. In addition, Shay's sister, Hana, critiques her for not having black friends, something that Shay isn't sure matters. Meanwhile, in their city of Los Angeles, tensions are high over the trial of a police officer who shot an unarmed black man. When the officer is set free, and Shay goes with her family to a silent protest, she starts to see that some trouble is worth making. Ramée effectively portrays the importance of the Black Lives Matter movement and the difficulty of navigating complex social situations while conveying universal middle school questions about friendship, first crushes, and identity. Shay's journey is an authentic and engaging political and personal awakening. Ages 8–12. (Mar.)

Mya's strategy to save the worldKyi, Tanya Lloyd, 1973-

The only black girls in townColbert, Brandy