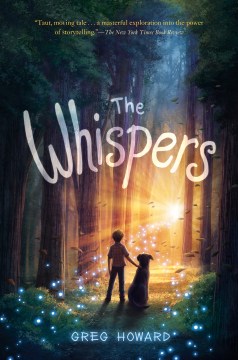 A boy attempts to find his lost mother in this moving tale. Riley's mother used to tell him stories about the Whispers—all-knowing beings from the woods that can make one's desires come true. So when Riley's mom disappears, Riley seeks out the Whispers, with the help of his best friend, Gary, and Dylan, the enigmatic but kind older boy he has a crush on (even though his church says that's a sin). But the woods might not be safe, and maybe it's true what everyone suspects: that Riley knows more about what happened to his mom than he's admitting. As Riley learns the truth about his mother, the Whispers, and his own feelings, he begins to heal. Readers will root for Riley, who retains his hope and humor even in the face of grief, bullying, and the intolerance of his small South Carolina community. Secondary characters are well drawn, and although the story is heartbreaking in places, the ending is full of optimism and love. A touching story of grief and healing. Grades 5-8. Copyright 2019 Booklist Reviews.

Before her disappearance, eleven-year-old Riley's mother told him the story of the Whispers, invisible beings who, in exchange for "tributes," will grant people their hearts' desires. When Riley himself hears the Whispers, he's willing to do anything to get Mama back. Riley is an unreliable narrator, but he's a thoroughly sympathetic one, and it's easy to root for his eventual understanding of the truth. Copyright 2019 Horn Book Guide Reviews.

Eleven-year-old Riley's beloved mother told him the story of the Whispers, invisible beings who know "all the secrets of the universe" and who, in exchange for "tributes," will grant people their hearts' desires. Now Mama has disappeared, and visits from the "World's. Worst. Police. Detective. Ever" make Riley feel he's under suspicion. It gradually becomes clear that Riley, who's been wetting the bed ("my condition"), has reason to be anxious. Things he's hiding include his possession of Mama's wedding ring and his fear that his "other condition," the one that led him to enjoy a shared kiss with Kenny from Kentucky, somehow caused her departure. When Riley himself hears the Whispers, his intense desperation and self-blame make it believable that he's willing to sacrifice himself to get Mama back. Riley is an unreliable narrator, to the point that some readers may not understand right away what kind of book they're reading (see Sharelle Byars Moranville's 27 Magic Words, rev. 1/17, for a similar portrait of grief in disguise). But he's a thoroughly sympathetic one, and it's easy to root for his eventual understanding of the truth—and of his own blamelessness. shoshana flax January/February 2019 p 93 Copyright 2018 Horn Book Magazine Reviews.

Eleven-year-old Riley resorts to extreme measures to find his mother after she disappears, believing he is "suspect number one" in a case that hasn't moved forward in months, the details of which he can't fully recall. He always thought his mother's favorite story, "The Whispers," about magical woodland creatures that can grant wishes, was straight fiction until one night he hears them call "She's here." To find his mother, Riley seeks to recreate the tale, embarking on a camping trip with an endearingly motley cast of friends to enlist the fantasy forces. A running use of vocabulary words that grew out of a game Riley and his mom played both advances the plot and offers nuance to Riley's emotions. Howard effectively layers Riley's character and "conditions" (he has been wetting the bed since his mother disappeared, and his attraction to boys is at odds with his evangelical Christian upbringing), offering clues about his mother's fate that readers will piece together before he does. This touching, often wry novel offers a memorable psychological puzzle and explores grief and acceptance. Ages 10–up. Agent: Brianne Johnson, Writers House. (Jan.)

The truth as told by Mason ButtleConnor, Leslie

The thing about jellyfishBenjamin, Ali