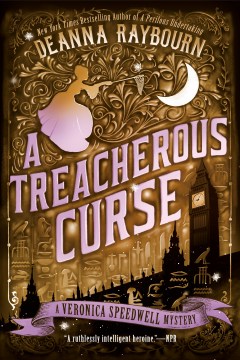 *Starred Review* The vivacious Veronica Speedwell, lepidopterist extraordinaire and amateur sleuth, sets off on another adventure with Stoker, her handsome, rugged, tattooed companion. When a photographer and a diadem go missing during an Egyptian archaeological expedition, Veronica discovers that the elusive photographer is Stoker's former best friend—the man who, years ago, ran off with Stoker's wife and left him for dead. With Stoker as the primary suspect for the photographer's disappearance, the duo take it upon themselves to unearth what really happened in Egypt, but—to Stoker's chagrin—that includes digging up skeletons of his own. As always, Raybourn (A Perilous Undertaking, 2017) writes with verve and wit. This time, however, she brings a new level of depth to her characters as Veronica discovers her first real home in London and the enigmatic Stoker confronts his harrowing past. A Victorian Phryne Fisher, Veronica is an irresistible, modern, engaging woman who uses scientific observation and natural charm to guide her investigations. Details about Egyptian relics, myths, and curses add an extra layer of intrigue to an already fun, rollicking puzzle. Though A Treacherous Curse can be read on its own, recommend the whole series to fans of upbeat, savvy, historical mysteries. Copyright 2018 Booklist Reviews.

Following last January's A Perilous Undertaking, this third in the New York Times best-selling, RITA Award-winning Raybourn's new series has freewheeling Victorian adventuress Veronica Speedwell investigating events recalling Tutankhamen's famed curse. Her friend Stoker is part of the ill-fated excavation of an Egyptian princess's tomb, with the latest catastrophe being the disappearance of an expedition partner along with an incalculably valuable diadem. With a five-city tour.

In 1888 London, Victorian adventuress Veronica Speedwell is intrigued by the newspaper reports about the calamities of the Tiverton expedition in Egypt, including stories of the appearance of Anubis, god of the underworld, and a curse attached to a recovered sarcophagus. In addition, the project's photographer, John de Morgan, and his wife have disappeared with a priceless diadem taken from the newly discovered tomb of an Egyptian princess. It's only when she and her working partner, the scientist Stoker, are called to meet with the head of Special Branch that she learns Stoker was once married to Mrs. de Morgan. Her husband had been the friend who had abandoned Stoker to die in the Amazon. To save Stoker's reputation, the duo team up to investigate the truth behind the expedition and the couple's disappearance. While readers of Elizabeth Peters's "Amelia Peabody" mysteries will enjoy this title, it is fans of Jane Eyre who will truly appreciate the third volume in Raybourn's historical series (following A Perilous Undertaking). Her intricately plotted and dramatic story features a strong-willed, independent woman who is the intellectual equal of the brooding Stoker.

Set in 1888, Raybourn's exhilarating third mystery featuring Veronica Speedwell and her colleague, Revelstoke "Stoker" Templeton-Vane (after ), centers on the strange case of John de Morgan. De Morgan, the photo- grapher on an archeological dig in Egypt plagued with mishaps, and his wife secretly leave the dig at the same time that a jeweled diadem from the tomb of Princess Ankheset goes missing. De Morgan and his wife travel across Europe to Dover only for de Morgan to vanish from the hotel room where his wife last sees him. Did de Morgan steal the diadem and abandon his wife, or is he another victim of the curse that plagued the Egyptian expedition from the beginning? After discovering that Stoker has an unsavory connection to de Morgan, Veronica determines to uncover the truth behind the alleged curse and salvage her partner's reputation. In audacious, decidedly un-Victorian Veronica, Raybourn has created a delightful cross between real-life reporter Nellie Bly and Phryne Fisher. Agent: Pam Hopkins, Hopkins Literary Associates. (Jan.)

The Lady Travelers Guide to scoundrels and other gentlemen:Alexander, Victoria

The secrets of WishtideSaunders, Kate

A lady's guide to etiquette and murderFreeman, Dianne