Army of empire : the untold story of the Indian Army in World War I / George Morton-Jack. 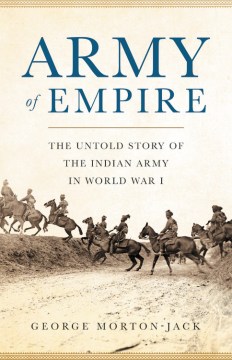 Troops from British India, modern-day India, Nepal, Bangladesh, Pakistan, and the tribal areas, played a significant though often overlooked role in World War I on the Western Front, at Gallipoli and beyond. Little written correspondence remains of how the Indians viewed their experience, though Morton-Jack () pieces together an exhaustive overview of their contributions, outlook, treatment, and motivations during the war. A chance for a financially better life was a strong motivator, and while accommodations were made by the British for caste and religious requirements, the Indians had to fight to receive full officer commissions, equal combat pay and housing, and recognitions of valor. Throughout the war, Indian soldiers and officers were made to feel subservient to whites and treated as racially and intellectually inferior. However, World War I could not have been won without the Indian Army, whose casualty rates were better than most countries owing to experience, training, and previous endured hardships. This sweeping history of the Indian Army would be a welcome addition to any history collection and appreciated by readers of World War I, India, and the British Empire.

In this massive, masterful history, author and lawyer Morton-Jack () illuminates the WWI contributions of the far-flung, multicultural Indian army. He tells "not only of the Indians' part in the Allied victory over the Central Powers, but also of soldiers' personal discoveries on their four-year odyssey." He mines previously unpublished letters and postwar interviews to reveal how Indian officers and enlisted men, as British colonial subjects and people of color, experienced military life. He writes with authority about the wrenching battles of Ypres, Gallipoli, Kut, the Somme, and East Africa, expertly weaving in how soldiers' political loyalty and Muslim soldiers' interest in jihad affected military campaigns. By war's end, the Indians' sense of unity with the British barely masked growing nationalist sentiment on the subcontinent. This book is essential for devotees of WWI military history and those fascinated by the complexities of empire. Illus.

Lawrence in Arabia: war, deceit, imperial folly and the making of the modern Middle EastAnderson, Scott, 1959-

Hero: the life and legend of Lawrence of ArabiaKorda, Michael, 1933-

Another man's war: the story of a Burma boy in Britain's forgotten armyPhillips, Barnaby

The Great War: July 1, 1916 : the first day of the Battle of the Somme : an illustrated panoramaSacco, Joe