Bones of the earth / Eliot Pattison. 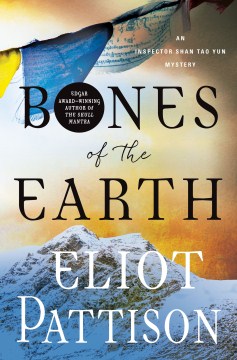 *Starred Review* Inspector Shan has been living a dangerous double life during China's brutal occupation of Tibet, ever since The Skull Mantra (1999), the first in Pattison's politically, spiritually, morally, and emotionally inquisitive series. Shan survived incarceration as a political prisoner with the help of similarly imprisoned Tibetan Buddhist lamas. Upon his release, he was relegated to a remote rural outpost that, nonetheless, has attracted dramatic clashes between the ruthless, well-armed Chinese and the poor yet resourceful Tibetan resistance, which Shan secretly supports. In the tenth and final installment, Shan investigates the deaths of an archaeology professor and his American student and tries to stave off the student's enraged father, who turns out to be a former FBI agent with unnerving knowledge and skills. Their entangled quests center on a massive dam project that threatens one of Tibet's most sacred valleys. Once again, Pattison summons majestic landscapes, intriguing cultural details, and unusual characters while pitting action against reflection, the old against the new, greed against faith, and ambition against love and compassion in a tightly braided plot that reveals the depth of Tibetan suffering and resilience. As a parting gift, Pattison grants his brooding hero a sunbeam of hope. Unique in its setting, cast, predicaments, concerns, meditativeness, and mysteries both human and divine, the Inspector Shan series is vital, relevant, and complexly affecting. Copyright 2019 Booklist Reviews.

Having opened the Inspector Shan series with the Edgar Award-winning , Pattison now closes it with the inspector's tenth outing. Shan Tao Yun is bothered by the execution of a reputedly corrupt Tibetan, suspecting that it was in fact a contrived murder, then further confused when a monk accused of killing soldiers with Buddhist magic is suddenly made special deputy to the county governor. It looks as if a big power struggle has been launched; will he survive?

Edgar winner Pattison incorporates the political realities of Tibetan life under Chinese occupation into a page-turning whodunit in his 10th Shan Tao Yun mystery (after 2017's ). Shan was once a respected inspector in Beijing, until he investigated "the wrong people" and was exiled to a Tibetan prison. After he provided unofficial help to the area's governor, Colonel Tan, he was released and given constabulary duties. Needing Shan's help again, Tan promotes him to special inspector to facilitate his inquiry into the Five Claws Dam, the biggest construction project the Chinese government has ever made in the region. Meanwhile, Shan is forced to witness the execution of Metok Rentzig, an engineer assigned to the project, who was charged with corruption. Shan finds evidence that Metok was framed and judicially murdered, perhaps to cover up others' culpability in the deaths of two archeologists who were attempting to protect Tibetan antiquities from destruction at the dam site. Pattison has never been better in depicting a brave man's dangerous pursuit of justice in a "land of broken places and broken people."

Zen and the art of murder: a Black Forest investigationBottini, Oliver