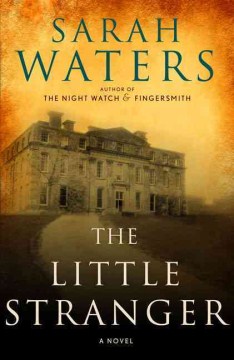 Waters' darkly atmospheric fifth novel is set at a decaying mansion in postwar England. The narrator, Dr. Faraday, first visited Hundreds Hall as a child, when his mother, a servant at the great manor, brought him there for a party. Nearly three decades later, he returns on a professional call and soon finds himself growing close to the owners: the widowed Mrs. Ayers, who has never gotten over the death of her oldest daughter, and her two adult children, Caroline and Roderick. Faraday treats Roderick's war injury but watches helplessly as the young man, who is convinced there is an evil presence in the house, slides into madness. After a devastating incident involving a young neighbor, Faraday finds he has no choice but to commit Roderick to a mental institution. Faraday finally faces the feelings he's developed for Caroline, but the malevolent force shadowing Hundreds Hall hasn't finished with the Ayers family yet. An eerie ghost story mixed with piercing class commentary, Waters' latest is downright haunting. Copyright 2009 Booklist Reviews.

Few authors do dread as well as Waters (The Night Watch). Her latest novel is a ghost story with elements of both The Fall of the House of Usher and Brideshead Revisited. In post-World War II Britain, the financially struggling Dr. Faraday is called to Hundreds Hall, home of the upper-class Ayreses, now fallen on hard times. Ostensibly there to treat Roderick Ayres for a war injury, Faraday soon sees signs of mental decline—first in Roderick and later in his mother, Mrs. Ayres. Waters builds the suspense slowly, with the skeptical Faraday refusing to accept the explanations of Roderick or of the maid Betty, who believe that there is a supernatural presence in the house. Meanwhile, Faraday becomes enamored of Roderick's sister Caroline and begins to dream of building a family within the confines of the ruined Hundreds Hall. This spooky, satisfying read has the added pleasure of effectively detailing postwar village life, with its rationing, social strictures, and gossip, all on the edge of Britain's massive change to a social state. [See Prepub Alert, LJ 12/08.]—Devon Thomas, Chelsea, MI

Waters (The Night Watch) reflects on the collapse of the British class system after WWII in a stunning haunted house tale whose ghosts are as horrifying as any in Shirley Jackson's The Haunting of Hill House. Doctor Faraday, a lonely bachelor, first visited Hundreds Hall, where his mother once worked as a parlor maid, at age 10 in 1919. When Faraday returns 30 years later to treat a servant, he becomes obsessed with Hundreds's elegant owner, Mrs. Ayres; her 24-year-old son, Roderick, an RAF airman wounded during the war who now oversees the family farm; and her slightly older daughter, Caroline, considered a "natural spinster" by the locals, for whom the doctor develops a particular fondness. Supernatural trouble kicks in after Caroline's mild-mannered black Lab, Gyp, attacks a visiting child. A damaging fire, a suicide and worse follow. Faraday, one of literature's more unreliable narrators, carries the reader swiftly along to the devastating conclusion. (May)

The house of the seven gablesHawthorne, Nathaniel, 1804-1864

The ocean at the end of the laneGaiman, Neil

The turn of the keyWare, Ruth