Sweeping up the heart / Kevin Henkes. 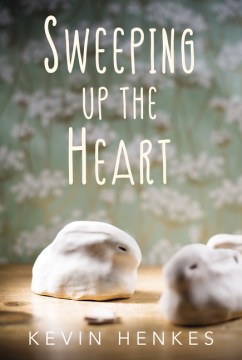 A lonely girl's life changes over spring break in this understated novel from multi-award-winning Henkes. Adults think Amelia is a "poor thing": her mother died when she was two, and her reserved English professor father spends a lot of time in his office. Her kind neighbor Mrs. O'Brien takes excellent care of her, but nevertheless, Amelia—who loves Emily Dickinson and making ceramic rabbits at the clay studio—knows that her life is rather constricted. But over spring break, Amelia meets Casey, who becomes the first boy to ever be her friend. She also realizes that a mysterious woman who looks like her dead mother might be following her. As Amelia discovers the mystery woman's identity, her world opens up in both exciting and scary ways. Amelia is a winning character: a dreamy, old soul who perfectly displays the naivety and the wisdom of growing up. Humor and lyrical language buoy the gently somber narrative. Henkes' latest story is, like most life changes, quiet yet momentous. Grades 3-6. Copyright 2018 Booklist Reviews.

In this story of coping with loss and change, lonely twelve-year-old Amelia befriends the local clay studio owner's visiting nephew, Casey, during spring-break week. When they encounter a woman resembling Amelia's mother--who died when Amelia was two--the friends begin to imagine the impossible. The week's cheerlessness morphs into something complex and important as new people enter Amelia's world, enabling her to better understand herself and those she loves. Copyright 2019 Horn Book Guide Reviews.

The elegiac spirit of Emily Dickinson's poem "The Bustle in a House" (from which this book's title is taken) reverberates throughout Henkes's story of people struggling to cope with love, loss, change, and human frailty. Twelve-year-old Amelia Albright is dreading her upcoming spring-break week (the novel's time frame) at home in Madison, Wisconsin. Her best friend is away for the year, and her melancholic and withdrawn father has rejected the idea of a Florida vacation. With encouragement from their loving housekeeper, Amelia seeks solace at the local clay studio where she has been going since she was six. She meets and befriends the studio owner's visiting nephew, Casey, whose parents are busy working on their marriage. Casey desperately wants his parents to stay together; meanwhile, the loss of Amelia's mother, who died of cancer when she was two, still hangs heavily over her. ("Can you be lonely for someone you never knew?") When they encounter a woman who looks like Amelia's mother, the friends begin to imagine the impossible, making this woman's actual identity, when discovered, all the harder to process. In that confusing space between childhood and adulthood, Amelia finds comfort in talking to her beloved stuffed lamb even as she experiences her first crush and wonders "what kind of woman she would be when she grew up." The week's cheerlessness morphs into something complex and important as new people enter Amelia's world, enabling her to better understand herself and those she loves, and to move forward "into whatever was still to come." julie roach March/April 2019 p 83 Copyright 2019 Horn Book Magazine Reviews.

Henkes's profound understanding of the adolescent heart and mind is evident as always in this story of two 12-year-olds frustrated by their parents. Amelia wanted to go to Florida for spring break, but her father, who hates to travel, has refused. Stuck at home in Madison, Wis., with her melancholy dad and their housekeeper, Mrs. O'Brien, her only respite is sessions at the nearby clay studio, where she's been sculpting since she was six. The first day of break, she's surprised to see a stranger there: the owner's nephew, Casey, who is staying with his aunt while his parents work on their failing marriage. Finding a kindred spirit in each other is the first of many unexpected events that occur that week. While the two are in a coffee shop, Casey has an "eerie" sensation about a woman outside the window. He's convinced that she's Amelia's long-dead mother ("Sort of like a ghost, but she's real"), and Amelia determines to discover who she is. In economic prose, Henkes () evokes the complexity of his characters' emotions and relationships, and offers a feel-good resolution. Ages 8–12.

The thing about jellyfishBenjamin, Ali