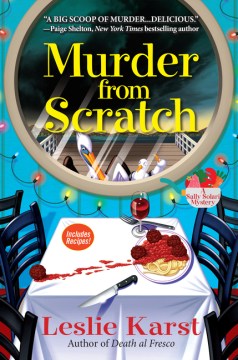 Foodies and fans of cozy mysteries will both love the latest installment in Karst's series featuring Sally Solari's spirited sleuthing. When Sally isn't working as a line chef at her restaurant, Gauguin, she strives to relax by racing her bicycle and playing with her dog. But when Sally's blind cousin, Evelyn, moves in with Sally in the wake of Evelyn's mother's suicide, Sally's life is turned upside down. Further complicating matters, Evelyn's mother's death, which appeared to be a simple overdose, proves to be much more sinister, prompting Evelyn and Sally to look for answers and leading them into the cutthroat world of restaurateurs. Will a uniquely scented spice be the key to catching the killer? With this intricately plotted mystery, Karst draws the reader further into Sally's engaging and often amusing world. From failed romantic romps to fatal flirting, this tale will have readers of Rita Mae Brown and Darci Hannah dining out on a delicious mystery. Copyright 2019 Booklist Reviews.

Competition can be murder, as Sally Solari, the owner of a French-Polynesian restaurant in Santa Cruz, Calif., can attest, in Karst's lively fourth series whodunit (after 2018's ). Sally's dad, Mario, has his own Italian seafood place, and a cousin of Mario's, Jackie Olivieri, recently left a restaurant called Tamarind to open her own pop-up, the Curry Leaf, with a similar menu to Tamarind's. When Evelyn, Jackie's college-age daughter, finds Jackie dead, Mario convinces Sally to take in Evelyn while her home is cordoned off as a potential crime scene. Though Jackie long ago broke ties with the Solaris, and Sally has never met Evelyn, nothing trumps . A farewell note to Evelyn found near the victim's body suggests to Detective Vargas that Jackie took a lethal dose of pills, but Evelyn swears he's wrong, and she and Sally set out to prove it. Suspects include Rachel, who was fired from the Curry Leaf and now is starting her own pop-up, and Al, Tamarind's volatile owner, who lays claim to all of Jackie's recipes. This is cover-to-cover fun for culinary cozy fans.

A cup of holiday fearAlexander, Ellie