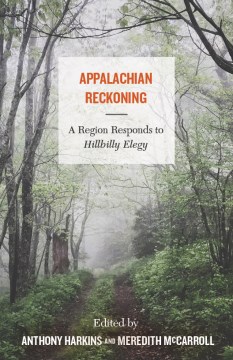 This impassioned collection of Appalachian regional art, essays, and poetry responds directly to J.D. Vance's bestselling memoir about an impoverished family awash in crassness, violence, and drug abuse. Each writer or photographer seeks to provide either a counterpoint to Vance's story or to demonstrate that not all Appalachians are uneducated hillbillies. Appalachian intellectuals such as T.R.C. Hutton, William H. Turner, and Lisa R. Pruitt delve into intricate stories about race, education, and post-coal migration, exploring both the identity of the white "hillbilly" and the black Appalachians virtually ignored in . Some essays combine statistics with personal stories of hardship, compassion, and perseverance; others hew to a conversational account of the author's family. Lou Murrey's photograph of diverse people protesting a federal prison in Kentucky and Roger May's stunning portrait of his aunt serve as a striking counterpoint to 's depiction of an apathetic people. Vance's belief that Appalachians committed themselves to failure loses traction when faced with these accounts of historical context, company towns, and current positive developments. As the editors Harkins and McCarroll note, while Vance offers one bleak "window" into the extensive multistate region, this valuable collection shows resilience, hope, and belonging are in Appalachia, too.

What you are getting wrong about AppalachiaCatte, Elizabeth

The new urban crisis: how our cities are increasing inequality, deepening segregation, and failing the middle class-- and what we can do about itFlorida, Richard L.